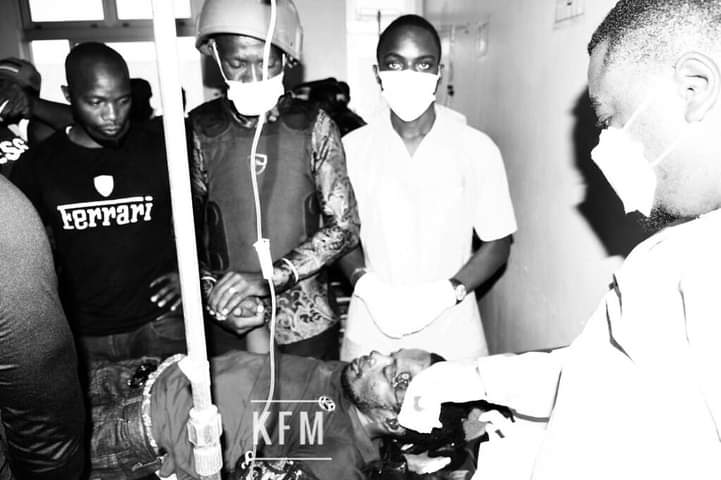 In wake of the state instigated war on the pressmen and crew members covering his campaign trail, the NUP party presidential candidate Kyagulanyi Ssentamu Robert aka Bobi Wine says he will not adhere to his programme for today in light of the escalating brutality on him and his team. Kyagulanyi made this announcement moments after surviving yet another assassination attempt on him. A bullet that hit journalist Kasirye was meant for Bobi Wine according to reports from some pressmen who covered the scuffle. “Bobi survived that bullet by just inches but I want to believe that it was directed at him,” one journalist who witnessed the incident told this site.

Earlier this morning as Hon. Kyagulanyi was leaving church in Masaka, police eventually opened fire once again at his vehicle and a bullet hit one Ghetto TV journalist, Ashraf Kasirye who moves on the same vehicle.

Our reporter at the hospital where Kasirye is admitted says the youthful journalist is receiving treatment from ICU. “He has lost consciousness due to over bleeding. The pain he’s undergoing is inexpressible but it’s our prayer to see him recuperate,” says our reporter. “Doctors are doing their best to see him back to better shape. But they say a minor operation and surgery is likely,” he adds.