Speak up for your people, Bobi Wine calls on artistes 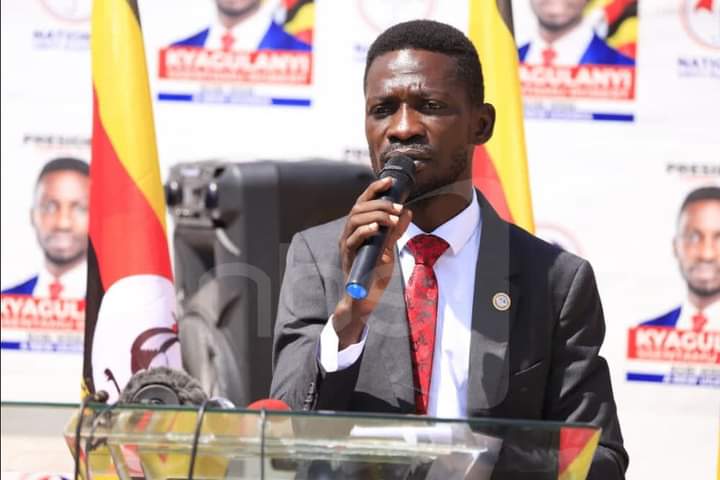 The National Unity Platform party presidential candidate Kyagulanyi Ssentamu Robert alias Bobi Wine has based on his morning press conference at Kamwokya to appeal to the artistes and celebrities to come out and scrutinise the government over the prevailing brutality on citizens.

“I call upon the world that we are part of the Universal Declaration of Human Rights,” Bobi said before adding; I encourage musicians not only to speak when Nigerians and foreigners are brutalized. Speak when your people are brutalized because they need you.”

The NUP leader further expressed his discontent with the attack police orchestrated on the FDC party presidential candidate Eng. Patrick Amuriat Oboi who was pepper sprayed by SSP Abraham Asiimwe in Tororo on Monday.

“I want to condemn the brutal attack on Hon. POA. He was attacked by a one Abraham Asiimwe aka Bravo, the same man who tormented me and my crew earlier in Mbale,” he said. Bobi also demanded for the freedom of Counsel Opiyo who remains incarcerated in Kitalya prison. “The brutal arrest of Nicholas Opiyo and others by a panicky regime. They are abducting citizens and holding them in safe houses. We join the world to demand their release,” he said.

On the ban on rallies, Bobi accused the EC of playing double standards and siding with the incumbent president Museveni. “Yesterday I saw Museveni in Mukono after blocking us from there, and I said, what kind of hypocrisy is this?,” Bobi said.

On the brutality, Bobi says the state is deliberately doing it to shatter their spirit and force them out of the struggle. “I know the regime is doing this to demoralize us. I can assure you, Museveni and your cronies, we will not give up. We will die trying,” he vowed.

On the Ghetto TV journalist’s critical condition, Bobi says there is some hope for recovery. “The doctors have told us that for Kasirye Ashraf to speak and open his eyes, it will take two weeks. The treatment has been very expensive. I want to thank all those who have contributed to Ashraf’s hospital bills,” he said.

He further commiserated and consoled with the families that have lost their loved ones to regime excesses. “Ever since we announced that we would contest against President Museveni, there has been untold brutality. I send my condolences to the families that have been murdered by the State. We will not relent, but fight until we are free,” he revealed.