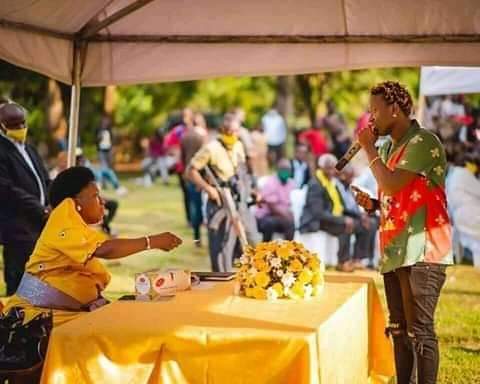 SEE ALSO: Speak up for your people, Bobi Wine calls on artistes

Titled ‘Am a non Violet Youth’, the song seeks to attribute all the prevailing bloodshed to the NUP leader whom they want to blame for the lives being lost in this election period. The song is inspired by the November 18, and 19 events that saw about 54 Ugandans gunned down by security operatives. In the lyrical composure of the song, all the violence is being attached to the youths who believe in the ideology of NUP. Gravity, in a Tuesday evening post released the graphics of his new banger which invited him an outburst of trolls on social media with many asking him to back out of politics and eat the NRM money peacefully.

Sources however intimate to this site that it is not the first time that Gravity is working for the NRM regime. Earlier this year duing the tough COVID-19 lockdown, the musician despite a ban on concerts bought a brand new Toyota landcruiser V8 model from money he acquired from the NRM secretariat. Gravity was tasked with singing songs that extinguish the message in the lyrics of musician turned politician Bobi Wine.