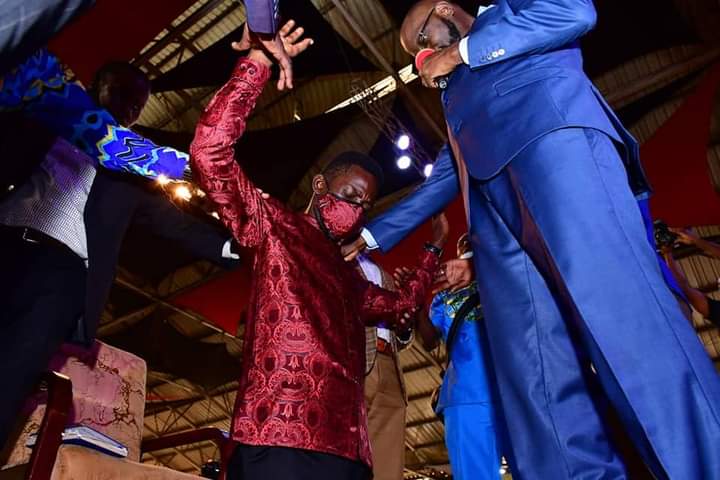 The NUP party presidential candidate Kyagulanyi Ssentamu Robert aka Bobi Wine has called on religious leaders to not only preach peace but also add justice to their menu as the country awaits the approaching January 14 general elections.

Kyagulanyi was speaking at the Omega Healing Centre in Namasuba where Pastor, Michael Kyazze prayed for and endorsed him for president.

Kyagulanyi’s call comes at a time when the government has embarked on luring celebrities, media houses, religious leaders and influential people to preach the ‘I choose peace’ initiative, a drive that calls for harmony and reconciliation in this electoral season.

“An injustice anywhere is a threat to justice everywhere, so without justice, there can never be peace,” one of the NUP supporters reacts as he backs Kyagulanyi’s call on religious leaders. “You can’t preach peace without justice,” he adds.

Even while he was at the Omega healing centre, Kyagulanyi nearly broke the congregants in tears when he revealed that he had been denied audience in most churches. “Even when I try to go for prayers, some churches fear to host me,” Kyagulanyi said. His remarks are consistent with what is observed at temples of worship where he attends prayers. In most cases, teargas and brutality are the order of the day when Kyagulanyi makes a visit to church. The most heinous incidents ensued in Masaka church where ghetto TV journalist Ashraf Kasirye who was moving with Hon. Kyagulanyi was shot by ASP Abaine Enock the RPC of Masaka. Similarly, ex Mityana DPC Alex Mwiine Mukono shamelessly fired teargas at a religious function where Hon. Kyagulanyi was expected to arrive.