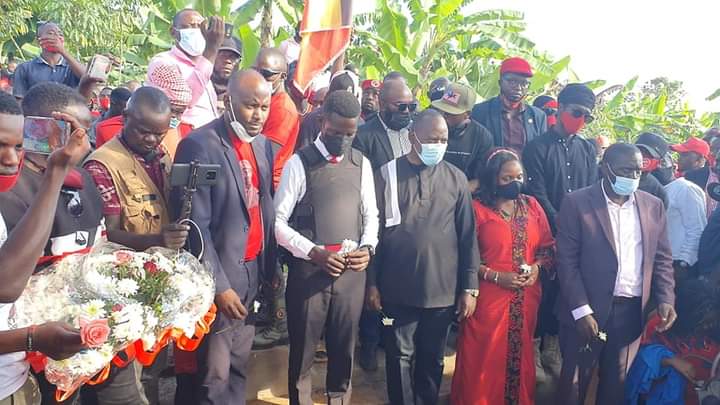 “Even the doves they freed to signify peace didn’t fly. It all signifies something that is not right,” Bobi Wine says.

“Another Museveni term means more arbitrary killings, more ill equipped hospitals, youth unemployment and the likes,” he added as he criticised proposals to extend Museveni’s tenure for another 3 years as proposed by UJCC.

“People are murdered daily. Sheikh Muzaata died but we didn’t get a report. That’s what a Uganda under Museveni means,” he adds.

“I am not a politician. I’m still the old Bobi Wine you knew. I’m representing the downtrodden, the underpaid police officers, boda boda riders, unemployed graduates, political prisoners and the likes. I’m not here for the elites, the professors and so forth. My victory is the people’s victory. Let’s all play our part,” he says.

On the doubts being cast by people who think Bobi will be subdued, Kyagulanyi says the mantle should be taken by all change seeking forces. “Start from wherever you are. I’m sowing the seed of patriotism in all Ugandans. I don’t want you to be enslaved in your country. Even if I’m under house arrest, I want the rest of the people to push on with the struggle,” he adds.

“I want a time to come where even myself when I go astray, Ugandans rise and speak against me. As Ugandans, we must all sober up and demand for our rights,” he adds.

On the silence of artistes, Kyagulanyi says it is hypocritical that they spoke on the Omah Ley situation but have gone silent on Nubian Li.

“Nubian Li is in jail with no crime, but artistes are not applying the same vigour they had when the Nigerian artiste Omah Ley was jailed. As celebrities, I call on you to fight for your people,” he urged.