IGP Ochola to NUP: We will kill you and your mothers will cry 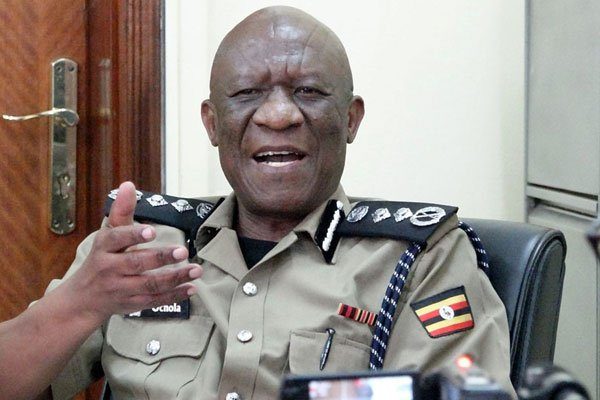 The Inspector General of Police, Martin Okoth Ochola has strongly cautioned members of the opposition parties who are allegedly recruiting youths to indulge in post-election violence saying it will end bitterly for them.

SEE ALSO: Gen. Tumwiine: We have a strong army that will crash you

Addressing journalists this morning in the weekly security briefing ahead of the polls, Ochola reiterated that as police, they have been monitoring opposition youths issuing threats to supporters of the ruling NRM party.  “We have been seeing NUP youths threatening to wreck havoc on others,” Ochola said. He added that as the police, the law grants them all the powers to engage rioters. “I would like to assure the whole country that whoever causes trouble will regret why his or her mother gave birth to him or her,” he added.

He also warned Bobi Wine to refrain from rallying his supporters to pitch camp at polling stations even after casting their votes. “There are political leaders who are urging their supporters to go in large numbers and monitor the elections on false claims of election fraud which is against the EC guidelines. There is no evidence of voter fraud,” he said.

With less than a few days to the poll, the political tension is already resoundingly escalating as the incumbent NRM regime seeks to consolidate its rule in all means possible including getting repressive on the dissent. Thousands of soldiers have already been deployed in epicentres of opposition support in what appears to be a plan to curtail and restrain the dominance of candidates like Kyagulanyi Ssentamu Robert aka Bobi Wine of NUP party.