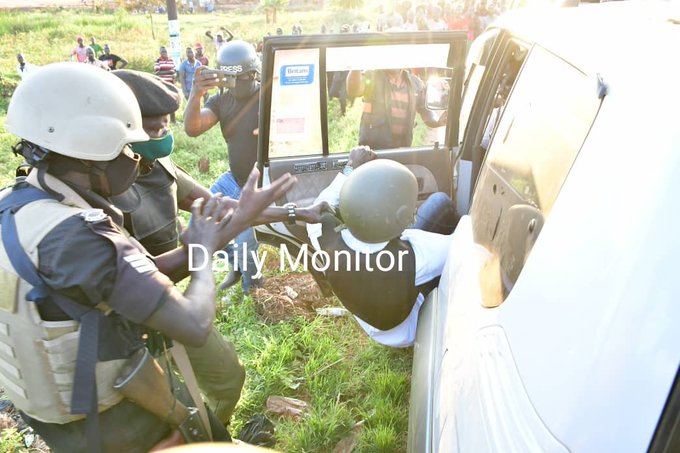 Popstar-turned-lawmaker Robert Kyagulanyi, who goes by the name Bobi Wine, told reporters during a Zoom news conference from his car on the campaign trail that his lawyer had submitted the filing to The Hague court on Thursday.
The ICC has the authority to hear cases of war crimes, genocide and crimes against humanity committed in the 123 countries, including Uganda, that have signed up to it.

Uganda has in the past sought the ICC’s help in bringing leaders of the rebel Lord’s Resistance Army to justice though it has more recently accused The Hague court of targeting Africans, a common sentiment on the continent.
The 41-page brief filed by Wine requests the ICC investigate Museveni, Security Minister Elly Tumwine and eight senior security officials. It asks the ICC to consider incidents dating back to 2018, saying the police and military have deployed, “widespread use of shoot to kill, beatings and other violence”.
“As we do with all such communications, we will analyse the materials submitted, as appropriate, in accordance with the Rome Statute and with full independence and impartiality,” the office of the ICC prosecutor said.

The ICC receives hundreds of briefs a year and a filing does not automatically lead to any investigation.
“That is sheer desperation,” Okello Oryem, Uganda’s state minister for foreign affairs, told Reuters.
“(The opposition) have tried everything under the sun, they have failed. Now they are resorting to the ICC. We are a law abiding country, we are a peace loving country,” he said.

During the Zoom call, Wine, who was wearing a helmet and flak jacket, could be seen being dragged from his car by men in police uniforms demanding he move his vehicle from the roadside.
The news conference resumed several minutes later.
“I expect a live bullet targeted at me any time. The biggest safety we get is from having cameras around us. If I was not on camera maybe something worse would have happened,” he said.
Wine, 38, has been arrested multiple times while campaigning for breaking laws governing public order and COVID-19 restrictions on large gatherings.
Security forces routinely disperse his rallies with tear gas, rubber bullets, beatings and detentions. At least 54 people died in protests that erupted when Wine was detained in November. [L8N2JF34O
Previous presidential campaigns have been marked by the intimidation of opposition candidates though rights groups say crackdowns have been more brutal and widespread this time.
Watchdogs Amnesty International and Human Rights Watch have said in recent statements that the authorities have violently repressed the opposition and its supporters during campaigning.
Earlier on Thursday, 23 members of Wine’s campaign staff were arrested, he told reporters on the Zoom call. The police did not immediately respond to a request for comment.