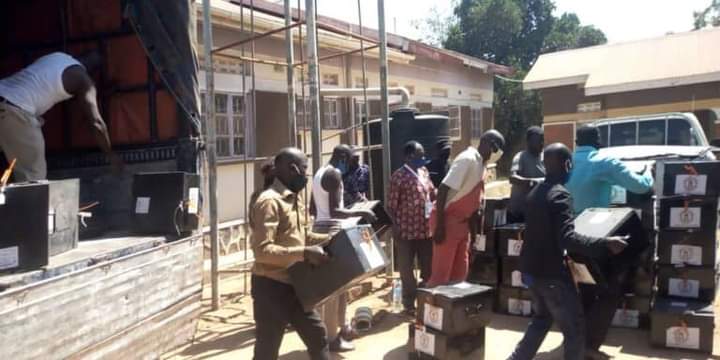 As Ugandans are still amused by the rigging plans that have started manifesting in Bundibugyo and Hoima where EC ballot seals were broken by NRM agents, this very morning Koboko District has received 190 voting materials for Presidential and Parliamentary Elections ahead of next week’s elections out of which 14 contained broken seals.

The broken seals raised eyebrows of those who turned to witness the delivery of the electoral materials. The Electoral Commission Returning Officer, Ezale Osuman, explained that only the orange ones were broken.

“Out of the 190 boxes we received, 14 had broken white seals. It is only the white ones which were broken but not the orange ones.”

Ezale adds that out of the 14 broken seals, five of the seals got broken on transit while the nine got broken as the black boxes were being offloaded. He says that they were immediately replaced in the presence of the stakeholders and police before taking them inside for custody.

He further says the the district electoral commission office is still expecting other election materials which will be delivered during the week.

While witnessing the delivering of the materials, Mr Samuel Abwang, the District Police Commander Koboko says security will be beefed at the commission offices to ensure safety of the materials until the end of the electoral process.

“We are going to beef up the security of this place until the end and I will encourage anyone who is not part of this place not to come here unless you are called by either the commissioner on knowledge of security,” he said.

Ms Lucy Afako, the NRM chairperson of Koboko district said: “By witnessing the delivery of the election material, I am happy and this shows transparency in the commission and actually this has given us hope that the elections will be conducted.”

According to the district Electoral Commission register, Koboko has total of 89,000 voters and 190 polling stations.

Uganda will start its elections on 11th January 2021 with the election of the district councilors and later presidential and parliamentary on 14th January 2021.