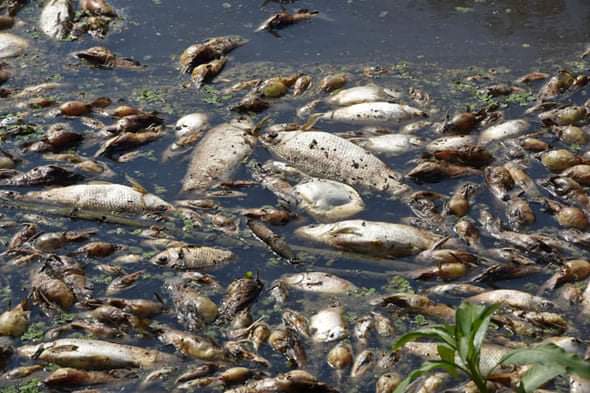 A looming environmental tragedy is underway as the unmonitored Chinese activities in Ugandan natural resources take effect under the reluctant Museveni regime who has been a close ally to Beijing.

Just this Monday morning, residents close to the waters woke up to a scene of hundreds of dead fish washed up on the shores of L. Victoria. The NEMA which is in the Chinese syndicate claims they died due to lack of oxygen but locals dispute the report. “There are dangerous chemicals being disposed from Chinese factories and industries,” Zilabamuzale Alex, a fisherman says. “Every night, we see a strange truck carrying greenish chemicals which are then poured into the water. We don’t know the reason behind this. When we asked, one of the Chinese nationals told us that these are fertilisers,” Zirabamuzale further reveals.

Communities living in and around the shores of Lake Victoria have recently been concerned by the growing number of dead fish, especially Nile Perch, being washed to the shores. The dead fish are not only an eyesore but also emit an offensive odor as the decomposition occurs.
The occurrence has been attributed to a drop in oxygen levels which could be resultant from the chemicals disposed into the water by Chinese nationals. Nile perch is species of fish known to be sensitive to low oxygen levels- (below 2 mgl).