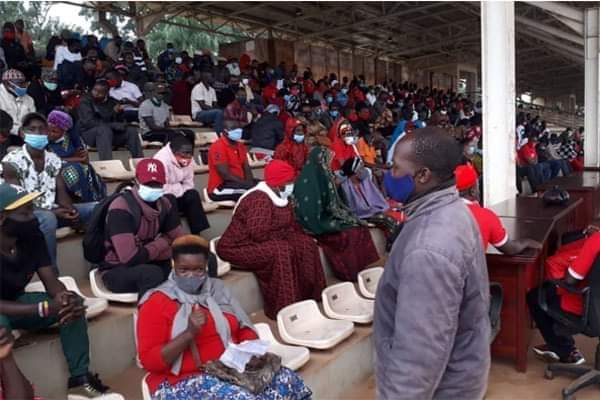 About 300 people from five divisions of Kampala District claiming to be National Unity Platform (NUP) coordinators and supporters on Sunday asked officials of the ruling National Resistance Movement (NRM) to give them money in order to defect to the party and to be peaceful on polling day.

The group led by a one Abdu Kabenge who claimed to be the NUP national coordinator for boda bodas, said if the government gave them between Shs500,000 and Shs1m each, they would not “engage in violence” on election day.

Kabenge urged members of the group not to participate in any election violence.

“What is the most important thing is to work for peace. Mr Rugunda, if all these people seated here left when their pockets are “smiling”, you will not see any riot in Kampala because they will be concentrating on the businesses the intend to create using the money you are going to give them,” Mr Kabenge said.

“These are hungry youths who want money. They just sat down and agreed to present themselves as NUP members to get some money from government. Of course members of state intelligence are not bright to avoid falling victim to schemers. We do not know them. We have never worked with them,” Mr Ssenyonyi said.

Kabenge accused President Museveni of giving out cash of about Shs700m to particular individuals, on several occasions, yet such people cannot mobilise even 50 people in Kampala.

He said those who are capable of mobilising thousands of city dwellers are asking for less money which the government can afford.

He said that all the people he brought to meet Mr Rugunda are boda boda riders and vendors who have been participating in protests in Kampala.

He said if they were given instant cash, there would be no protests in Kampala before and after elections.

Dr Rugunda commended the youths for meeting government to talk peace during and after elections, but said NRM does not have money to buy people to join the party.

He said all those who want to join NRM should do so out of their conviction.

He urged the youth to utilize government programmes that have been put in place to get them out of poverty instead of asking for cash.

However, we have learnt that after Dr Rugunda and NRM leaders had left the venue, the alleged NUP supporters were given cash and party T-shirts after the meeting.

They left the venue celebrating. One of the members who did not reveal her name said she received Shs70,000 while another group member said he received Shs200,000.

However, when this reporter asked them to present their party cards to prove their NUP membership, the group did not produce any