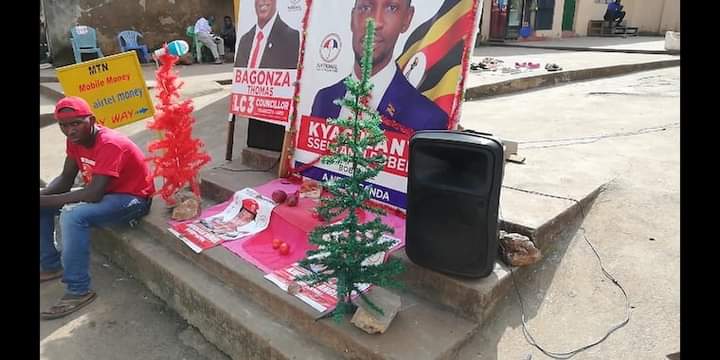 Three youthful supporters of National Unity Platform (NUP) presidential candidate Robert Kyagulanyi have been arrested in Nansana municipality by the army, for playing pro-Kyagulanyi music and cleaning his campaign posters.

Uganda People’s Defense Forces (UPDF) soldiers attached to Jjagala police post in Gombe Division, Wakiso district arrested the three youths while on a foot patrol. According to residents, the soldiers first fired several rounds of live ammunition in the air before arresting and detaining the youth at Jjagala police station.

Catherine Nakyeyune a resident of Jjagala village says that she heard bullet rounds being fired and later saw the soldiers taking away the speakers that were placed near a huge campaign poster of Kyagulanyi.

Uganda on Thursday this week goes to polls to elect the president and members of parliament.

John Ssegirinya says that the arrested youths were just dancing and cleaning the poster of Kyagulanyi when security forces started firing bullets to disperse people and forced them to close their business.

“The boys were just dancing to Bobi Wine’s music, they were not hurting anybody, they were just dancing and drinking soda. It was such a happy sight but we wonder where the army officers derived anger from and started firing bullets – putting the entire trading center under unnecessary tension,” said Ssegirinya.

Loy Nalweyiso says that they should leave these youths to support the candidate they want because they are not committing any crime.

“Sometimes, I don’t understand these people in government. The boys were just dancing in front of Bobi Wine’s picture, our shops were open and there was no trouble whatsoever. Then the army comes and starts shooting and we were forced to close our shops yet tomorrow they are going to come and ask for taxes and our landlords will ask for rent. Now, if they can shoot bullets when people are dancing to mere music, what will happen when they actually vote for their preferred candidate,” said Nalweyiso.