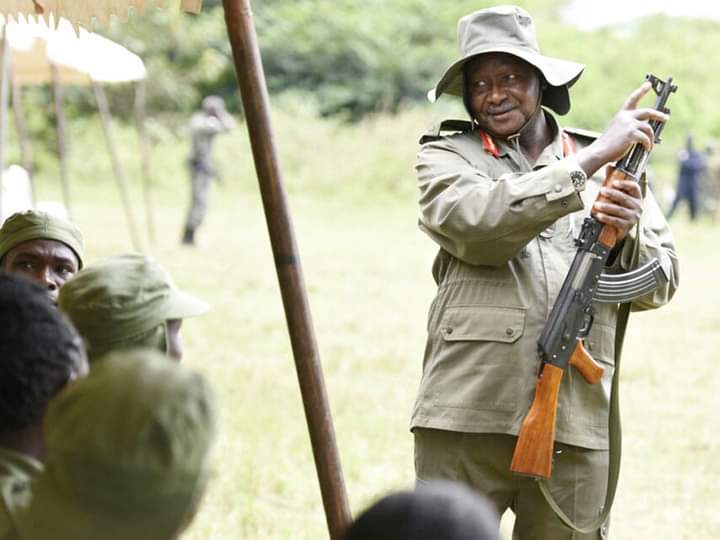 After the capture of power in 1986, Ugandans loved Museveni from head to toe with almost all believing that he was the man to steer them to a new Democratic Uganda. Songs like ‘Museveni yaleta Emirembe’ dominated all government ceremonies. In the villages people used to say ‘Kasita tufuna otulo’ literally meaning ‘atleast we can have a good sleep in the night’ something that was unlikely during the days of Obote and Amin.

However things started to change especially by 2005, when the great warrior and revolutionary started undoing and undermining what he had fought for. 2005 saw the amendment of the constitution to allow President Museveni extend his stay in power for more than two terms. Members of parliament were bribed to scrap off the term limits. This sparked of the journey that has seen Museveni stay in power for over 3 decades.

In 1986, he had been famously qouted saying that “The problem of Africa is leaders who over stay in power.” By 2006, Museveni had already been in power for 20 years

The 2006 Presidential election was said to be one of the most rigged election in Uganda’s history. It saw pre-ticked ballot papers being stuffed in to ballot boxes, polling agents of opposition Candidates being arrested and harassed, altering results on declaration forms and breaking of seals on ballot boxes.

According to Gen David Sejusa who was by then the cordinator of Intelligence, he says that Dr Kizza Besigye won the Presidential polls of 2006 but results were altered at Basiima House in Kampala where NRM had set up its own tally centre. Sejusa adds that the EC Chairman, Eng Badru Kiggundu only read results that were sent to him from Basiima House.

2017 saw the removal of age limit something that many saw as a direct beneficiary for Museveni’s extension of stay in power. On passing of the bill, parliament was attacked by security forces who beat up and threw out MPs that were against the removal of the age limit. The ugly scene was seen by many as a directive from the head of state as he was determined to stay in power for long.

As we go to the 2021 polls, many Ugandans who have lived since the days of the 80s say that they have been disappointed by Museveni a man they thought was the Nelson Mandela of Uganda after he has played all tricks to see that he doesn’t live power. For the youths, the story is worse. Many youths especially those below 35 years are yearning to see a new leader in power since many of them were born after Museveni captured Power in 1986. Many see Presidential candidate Robert Kyagulanyi known to many as Bobi Wine a fellow youth as the Messiah who will lead them to the promised land. If Museveni wins the 2021 polls, he would have ruled Uganda for 40 years at the end of the term.