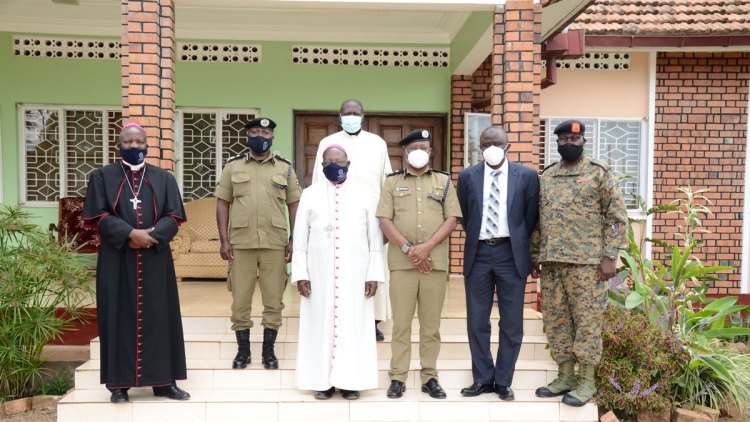 The retired Masaka Archbishop John Baptist Kaggwa was on Wednesday evening pronounced dead after reportedly battling Covid for the past 60 days.

Bishop Kaggwa is widely recalled for his outspokenness and open mindedness. “Everything has an end. Who knew that Amin and Obote would go. In life only God knows our destiny,” the Bishop remarked moments after facing the wrath of the ex Mityana DPC Alex Mwiine. “I heard one of them saying they can’t hand over power. These remarks are regrettable. We are all destined for one thing. We are on one cause. We should love and respect the people of our country. He who will change the world is nobody but you,” he said in a reference to Capt. Mande’s remarks demonising NUP and its leader Bobi Wine.

Bishop Kaggwa was pronounced dead on Wednesday evening by the diocesan communications director, Rev Fr Ronald Mayanja.
“It’s true the Bishop has gone to be with the Lord; he succumbed to Covid-19, which he has been battling for two months,” Fr Mayanja said.

John Baptist Kaggwa was born on 23 March 1943 at Bulenga, Busiro County, and went to Lubaga Boys Primary School from 1952 until he completed Primary 6 in 1957. He then joined Kisubi Minor Seminary in 1958. Later he studied at Katigondo Major Seminary.
In May 1970, Kaggwa was ordained a priest in Rome. On 12 December 1971, he was ordained a priest, also in Rome, at the age of 28 years.
In December 1994 he was appointed coadjutor Bishop for Masaka and ordained a year later. Three years later in 1998, he succeeded Adrian Kivumbi Ddungu as the Bishop for Masaka.
On 6 July 2019, Bishop John Baptist Kaggwa was the principal consecrator of his successor Bishop Severus Jjumba.