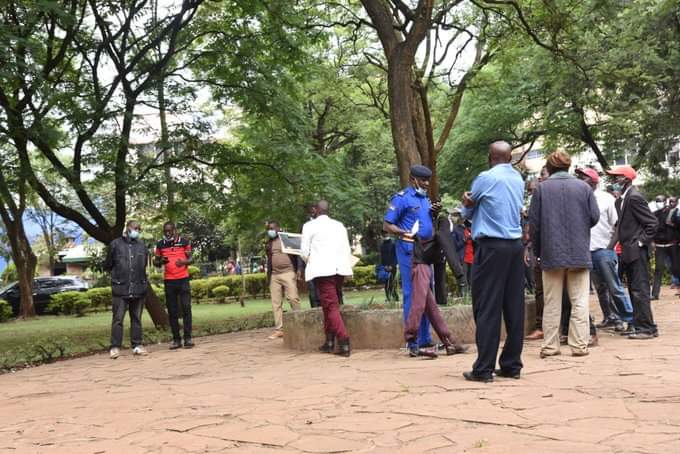 Police in Kenya have dispersed a swarm of protesters at Jevanjee Gardens, Nairobi who had gathered to protest against outcome of the Ugandan elections that saw the incumbent  president Museveni retain his seat in polls widely mired with irregularities and repression.

Armed with placards inscribed with wordings calling for action on the repressive Museveni government, the peaceful protesters marched towards the Ugandan high commission in Nairobi singing revolutionary songs praising the NUP party presidential candidate Kyagulanyi Ssentamu Robert aka Bobi Wine who has been in a de facto arrest at his residence in Magere, Wakiso district.

Police foiled the march claiming that the protesting group did not have permit to march to the high commission. The protesters however vowed not to back out till Bobi Wine, a popstar turned politician regains his freedom. “This is just the beginning,” one protester says. “We will soldier on till Ugandan citizens regain their freedom. We call on Mr. Museveni to respect the will of the people,” the protesters argued.

Bobi Wine has been under house arrest since the Ugandan polls were concluded and the commission approved the extension of the incumbent Museveni’s reign for another 5 years after declaring him victor with 58% of the poll while Bobi was awarded 34.8% of the votes.