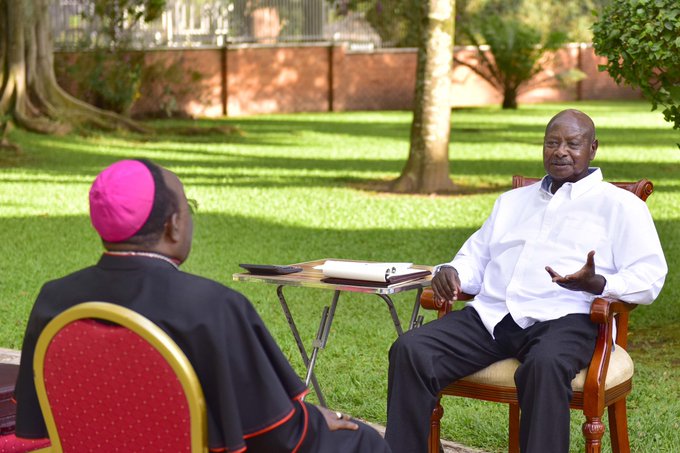 The Archbishop of Kampala Dr Cyprian Kizito Lwanga has asked president Yoweri Tibuhaburwa Museveni to forgive the opponents he ran against in the recent presidential election and focus on forging a way forward for the country.

Dr. Lwanga argues that if Museveni feels embarrassed about being challenged by a youngster like Hon. Kyagulanyi Ssentamu Robert aka Bobi Wine, it is now outright to drift into harmony and reconciliation for the good of the country. “Forgive your opponents who have embarrassed you in this electoral process,” Dr. Lwanga appealed during a requiem mass for the fallen retired Masaka Archbishop John Baptist Kaggwa. “We believe if the country is to be at peace, it is good to reconcile with one another and we move on. President Museveni should forgive Bobi Wine,” Dr. Lwanga added.

Dr. Lwanga also appealed to government to consider the federal system of governance which he believes will relax the escalating political tension. “The country should federate and allow each region to govern itself,” appealed the Arch Bishop.

Since his declaration by the EC as the winner of the 2021 presidential polls, Museveni has embarked on a much more repressive approach towards his major opponent, Bobi Wine, a popstar turned politician. Bobi Wine has been under a de facto house arrest since the announcement of the presidential poll results. Wine and his wife, Barbie Ithungo are confined in their Magere residence with external visits largely monitored and prohibited. Court is yet to give a ruling on Monday to establish if the deployment is justifiable or not. In Wine’s Friday address to his supporters, he strongly rejected the polls and said he has overwhelming proof that the NUP party won the presidential contest.