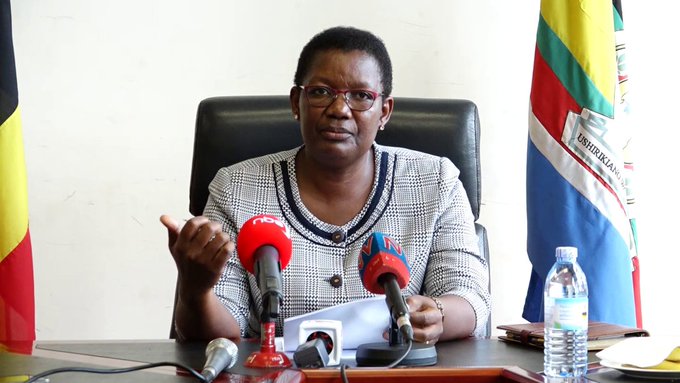 The minister for presidency Esther Mbayo has strongly attributed NRM’s poor performance in Buganda on the Catholic Church and Buganda Kingdom which he says openly indulged in partisan politics.

The recent voting pattern saw the ruling National Resistance Movement (NRM) overwhelmingly defeated in the Buganda region for the very first time since the revival of political parties.

In a rebuttal presser while addressing journalists on Friday about the looming 35th National Resistance Army (NRA) Victory Day celebration to take place at State House Entebbe on 26th January, Mbayo claimed they have it on record that during campaigns Buganda kingdom officials and priests in the Catholic Church were advocating for voting for only leaders who have Buganda’s interest at heart

Mbayo further asked the two institutions to stick to their traditional core roles other than medde in partisan politics.
“Everybody should concentrate on what they are supposed to do. If you are the church concentrate on that, and if you are a politician, concentrate on that. If you want to join politics, put off the robes and come,” said Mbayo.

Earlier last week, Katikkiro of Buganda Charles Peter Mayiga responded to those accusing the people of Buganda for the way they voted in the recently concluded election. Mayiga dismissed talk of sectarian voting in Buganda, saying there is no harm in Baganda voting for fellow Baganda as other regions also do the same.
Mayiga advised the NRM to instead look at the failed service delivery in the region.