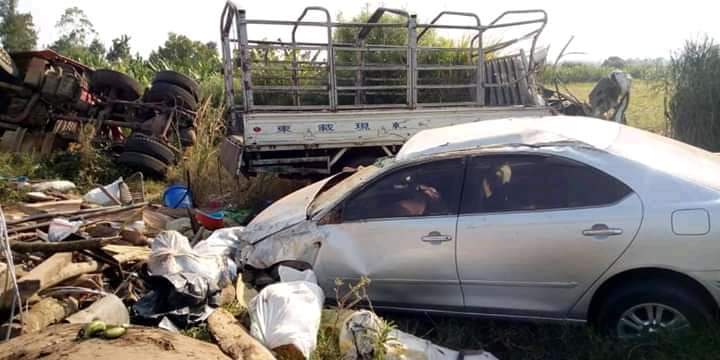 At least 32 people were confirmed dead and five others seriously injured after a grisly accident involving five vehicles along Fort Portal-Kasese highway on Tuesday night. At about a half past midnight, a vehicle carrying a coffin is said to have rammed into another at a deadly spot deliberately neglected by the Uganda National Roads Authority, UNRA leading to deaths of 32 people on the spot.

The grisly accident occurred at Kihogo along Hima–Rugendabara road, according to eye witness accounts. The biggest section of the highway is still under re-construction. “UNRA engineers are to blame for these deaths,” Muhindo Said, a resident next to the scene says. “You cannot leave works lagging on top of not installing sign posts to caution road users and motorists. Too sad we have lost lives of taxpayers because of the negligence of these engineers who do shoddy works,” Araali Patrick, another resident says.

Pictorial of the grisly scene