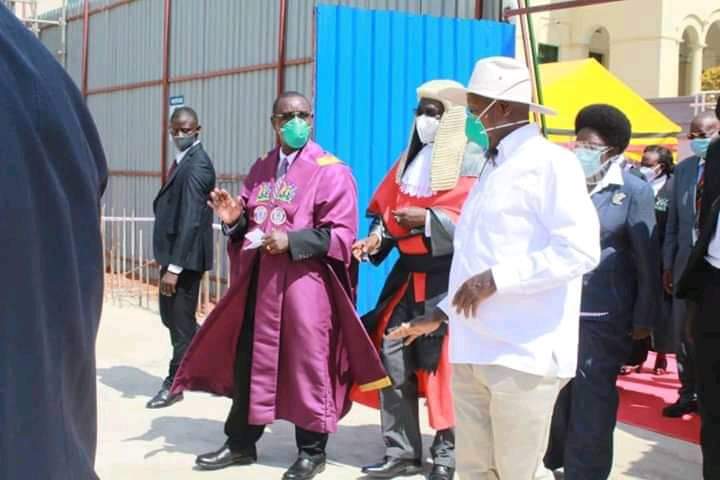 President Yoweri Tibuhaburwa Museveni has Friday paid a courtesy visit to the supreme court judges ahead of the elections petition case challenging his election.

The unannounced visit took place at the supreme court premises in Kampala and Museveni was received by the chief justice, Alphonse Owiny Dollo. Important to note is the fact that the Chief Justice is one of the panelists who will preside over the case in which Mr. Tibuhaburwa’s sixth term is being challenged by the National Unity Platform party presidential candidate Kyagulanyi Ssentamu Robert aka Bobi Wine.

In the engagement which seems to be a gesture insinuating that the executive arm of the government cannot grant total autonomy to the judiciary and legislature, Museveni held closed door engagement with the Chief Justice and asked him what offers his arm would wish to received from government in this new term.

This site has since learnt from reliable sources that the chief justice asked for a whooping budget equivalent to that of parliament so that judges and magistrates too can cruise those monster cars owned by Members of parliament. “As the judiciary, we feel isolated by government when we see MPs being rewarded highly yet we do almost similar work of crafting and dealing with the law,” the Chief Justice is quoted to have told Museveni. “We need a big budget so that every judge can at least own a modern vehicle. If this is not done, you will see our judges going to court on bicycles,” he added.

Museveni pledged to work on their prayer on condition that they be patient with him. “You know our economy is still small. We will work on this but it will take some time,” Museveni said. “The NRM government works in phases. We handle first things first,” he added.

The supreme court is set to hear the suit filed by the National Unity Platform party which seeks an annulment of Museveni’s victory.