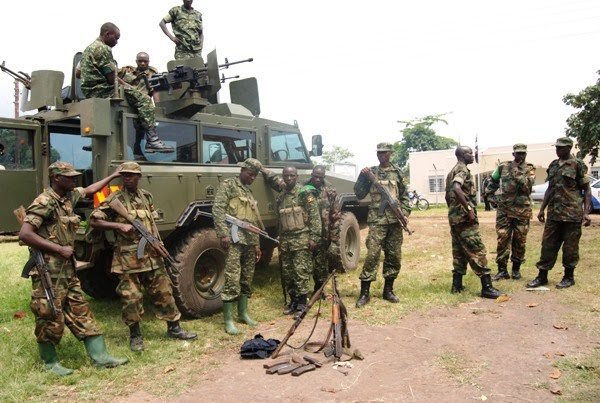 Even as the population has maintained calmness in the post election period as the opposition National Unity Platform party leader Kyagulanyi Ssentamu Robert aka Bobi Wine seeks legal redress, the regime has maintained heavy deployment of soldiers on all streets of major cities.

In Kampala, one can barely walk on a street for 5 minutes without encountering a platoon of heavily armed masked soldiers on a foot patrol. In the downtown Kampala which is an area personally earmarked by the Commander in chief, Gen. Yoweri Tibuhaburwa Museveni as a hotspot of violence, the soldiers even engage people numbering to 5 and ask them to split.

Vendors who work from the downtown intimated to this reporter that they are at times physically bullied by the soldiers who come and ask them to share some of their merchandise especially those who sell edible items. “They came to my stall and asked me to give them some of my pineapples,” Matovu, a street vendor near Owino market says. “Sometimes they tell us to give them hard cash. If you ask them why they are exploiting you, they will tell you off what they are doing is a national duty and therefore it’s our obligation to support them with what we have,” Nansirumbi, another fruits hawker says.

In a bid to facilitate and sustain the deployed soldiers littered on the streets of Kampala, the UPDF logistical department agreed that some government facilities especially schools were to be annexed and used as accomodation camps. Old Kampala Senior secondary school in the heart of Kampala is accomodating over 2000 soldiers. Similarly, London College of St. Lawrence in Maya is being used as a barracks facilitating mammoth number of soldiers. No official comment from the security forces to justify the annexation of schools has been shared with media yet.