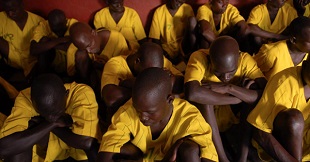 Police in Mpigi have foiled a plan to dispose off bodies of at least 15 missing people who were reportedly abucted by security operatives during the recent tense electoral season.

According to Lydia Tumushabe, the police spokesperson for the Katonga Region, the LC1 chairman for Busese A village in Nkozi sub-county, Mpigi district was informed of a person identified as Aisha Kwagala transferring remains of 15 persons from Kitalya to have them buried in some land in Busese village.

Sources in Kitalya told this site that Aisha was assigned a contract of getting rid of bodies of people who die in Kitalya prison facilities and safe houses in Kyengera. “Please do not mention my name anywhere in this report,” the security source prayed. “It is true that people die on a daily basis in Kitalya. What we do is dispose off their bodies in mass graves and swamps. This is smartly done by some woman known as Aisha. I am telling you all this because I am really fed up of this sileng genocide the government is conducting on our innocent people, ” he adds.

Moments after Aisha arrived with the 15 bodies, the land owner was tipped off and rejected to host the corpses on his land. “Kwagala and her team to carry their bodies back. It’s believed that the remains were later brought back deep in the night and dumped in Busese village where they had already prepared for burial and they just left them unburied,” Tumushabe, the regional police mouthpiece told the press. “The suspects are at large but inquiries into the offence of disturbing the peace of the dead registered under Nkz CRB: 005/2021 at Nkozi police station,” Tumushabe added.