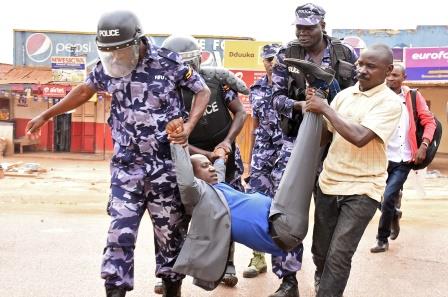 Today the life and times of the slain Anglican church Archbishop Janan Luwum is to be celebrated. The fallen cleric is remembered to have been an outspoken critic of the Idi Amin regime which is considered to be one of the worst dictatorships to ever exist on Africa.

His persistent bold comments on the Idi Amin regime repression is what is believed to have ignited his assassination ploy. Sources knowledgeable to the incident say the Archbishop was on this very fateful day forty years ago blocked by military from a road in the Kampala city centre. President Idi Amin is said to have been personally involved in the heinous incident and in fact, multiple sources say he pulled the trigger that shot and killed the deceased Archbishop.

Two other ministers Oboth Ofumbi and Oryema were killed on this very day after Idi Amin suspected that they were planning subversion.

Moments after their murder, their vehicles were towed away from the murder scene and taken to another place where the brutal Amin regime wanted to hatch a narrative that the slain cleric and the ministers had died in a car accident.

Forty years later, the things that the Bishop condemned are still manifesting. The abductions are now rampant and the impunity too has escalated. Political persecution and regime orchestrated repression towards the dissent is now the order of the day.

The Janan Luwum day was marked on the Ugandan calendar in year 2014 as a tribute to the fallen cleric. Today’s celebrations are to coincidentally be marked at State House Entebbe.

Upon the death of Janan, the Westminster Cathedral in the United Kingdom made it a norm to commemorate his life in cognizant of his unwavering commitment to contest the state repression and brutality.