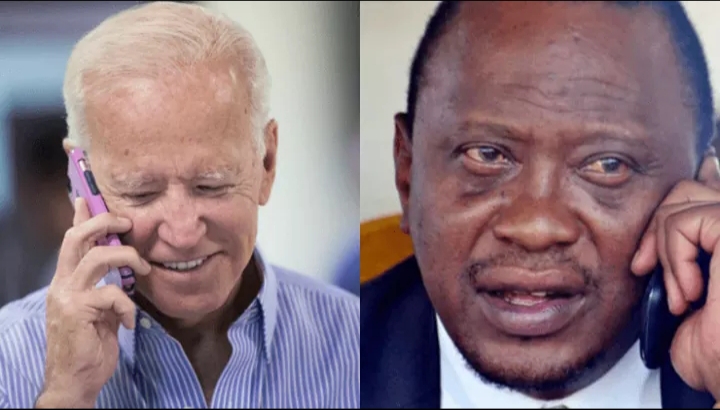 There is tension and anxiety in state house after president Yoweri Tibuhaburwa Museveni summoned a crisis meeting with his political advisers to discuss why foreign forces are for the first time in his 36 year tenure declined to overtly associate with him.

On Thursday, US president elect Joe Biden who is over 50,000 miles away telephoned Kenyan leader Uhuru Kenyatta in a conversation that lasted for more than 3 hours. This according to reliable reporta did not go well with president Museveni who had proclaimed to he the most loved US ally in the East and Central African region.

A source party to the meeting which tool place on Friday night at State House Entebbe spoke to this site on the condition of anonymity and disclosed that Museveni is restlessly worrying about the escalating US relations with his Kenyan counterpart, Uhuru Kenyatta at the expense of the Kampala administration. It is alleged that Museveni is fearing to lose the AMISOM deal to Kenya which is much more geographically favoured than Uganda.

“At first it was warships docking at the port Mombasa and displayed all their marine and aerial arsenal,” the state house aide says. “And now it is a phone call from the newly elected US president Joe Biden to outgoing Uhuru Kenyatta,” he adds.

The source further says that Museveni is unhappy with the delayed congratulatory messages and remarks from the western nations. “It is as if they don’t recognise his legitimacy this time round,” the state house aide says. “Instead of sending congratulatory messages, they are slapping us with sanctions and suspending aid,” he adds.

“In the entire East African region, I am the only leader who has the best military capacity that ranks only second to the Egyptian on the continent,” Museveni reportedly said during the meeting. “I don’t understand these white friends of ours. Why would Biden prefer not call me to congratulate me and rather ring Kenyatta? At least he would have rang my friend Magufuli who has just won an election,” he added.

It is important to note that Democrats are much more adventourous than their Republican counterparts. In fact, in 2011 when US president Barack Obama (Democrat) deposed Libyan dictator Muammar Gaddafi, Joe Biden was his Vice president. Throughout the 4 years of Donald Trump, the US did not invade any other nation which is perhaps why the Democrats launched a media campaign against him for bringing down the glory they are known for as Americans. Odds are high that Biden may be confrontational on world military Juntas like the one of Myanmar and Uganda.