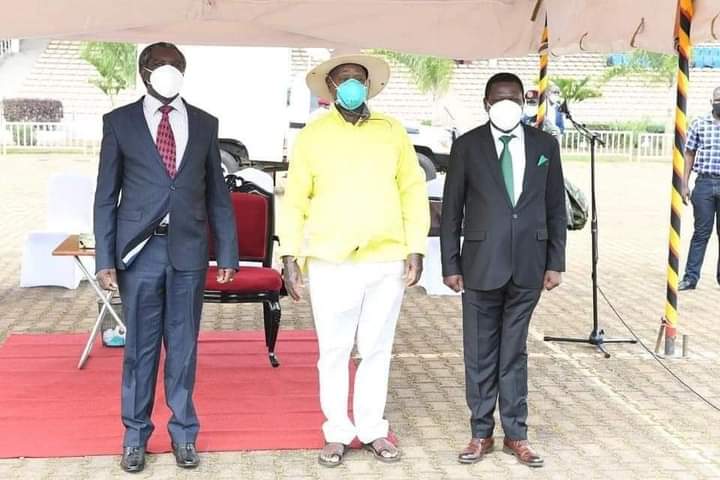 It’s outright to opine that what was identical to all the parties like the veteran Uganda People’s Congress, UPC and the Democratic Party is the fact that the two directly work synonymously together with the incumbent president Museveni. This is perhaps due to the fact that he rewarded some of their members with juicy government slots and ministries. Nobert Mao who heads the DP has a minister in the Museveni cabinet and that’s none other than Hon. Florence Nakiwala Kiyingi who serves as the Youth Affairs Minister. On top of this, Mao’s wife is a benefactor of the NRM government as she reportedly works as an aide to Museveni in State House. Similary, Jimmy Akena who heads the faded UPC secured a ministerial slot for his wife Betty Amongi who serves as the Kampala Minister.

It is therefore no wonder that Mr. Mr. Museveni turned up for the function almost barefooted. He was putting on craft sandals at an event where he indirectly depcited his lack of respect for the people he was hosting. Museveni knows Mao and Akena are only after his cash which explains why even in his remarks, he spoke authoritatively to the two just to prove a point that he is the one in control. “I’m very happy to have attended this summit because we discussed some topical issues including the issue of disappearances of people arrested by security forces as a consequence of the insurrection which people were trying to organize,” Museveni exclaimed in his opening remarks.

On top of this, the soft tone Mao and Akena used in negotiating for the abducted victims shows that the entire eventvwas just a ‘tea party’ as FDC and JEEMA who opted out had anticiapted. Besides, it was Mao himself who confessed during the NBS Frontline political show that he had received a phone call from Museveni inquiring about who is heading the IPOD summit chairpersonship and yet ironically he was the very person in charge.