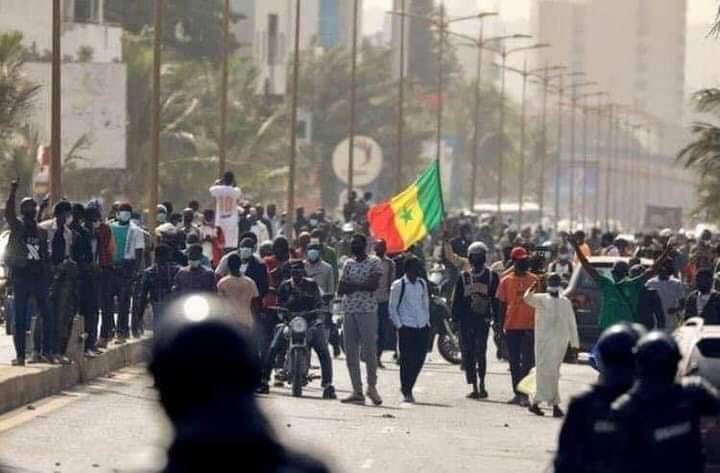 Senegal still grapples with violent street clashes between supporters of the opposition candidate Ousmane Sonko and the state police.

The riots were sparked by a Wednesday court decision which green lighted the remanding of Ousmane Sonko who is challenging the current repressive leadership.

By Saturday, at least 5 people were already confirmed dead on the streets of Dakar. A government linked radio station and a supermarket were set ablaze by the enraged demonstrators. Police responded with erecting barricades and roadblocks across all streets in Dakar to bar supporters of Ousmane from accessing the city centre.

“What we are living through in this country is incredible, it is very shameful,” one protester told Reuters news agency. “We are fed up of this government,” the protestor further adds.

Two private Television stations which granted coverage to the protesters have been deregistered from the broadcaster’s list and asked not to operate for another 72 hours. The Government accuses the media outlets of fueling anger by covering the clashes.

Internet Monitor NetBlocks says social media access and messaging services was cut off by Thursday when the protests were starting. The UN’s special envoy for West Africa Mohammad Ibn Chambas has called on protestors to refrain from using violent strategies.

Mr. Sonko, 46, faces rape charges after the state claims that he used a woman against her will. The woman is said to have been working in a beauty salon.

After investigations, Sonko was picked from his home and charged in the courts of law. Though he denied the charges on grounds that these are politically motivated fabrications, court opted to remand him.

Sonko, just like Uganda’s 39 year old opposition leader, Bobi Wine is a young revolutionary. He enjoys a mass support from the youths who constitute the majority of the Senegalese population. In 2014, Sonko formed a political party and came third in the 2019 presidential polls with 15% of the total vote. “There is enormous potential in this country. It is unacceptable to see our people suffering,” he remarked in a famous video after the polls.