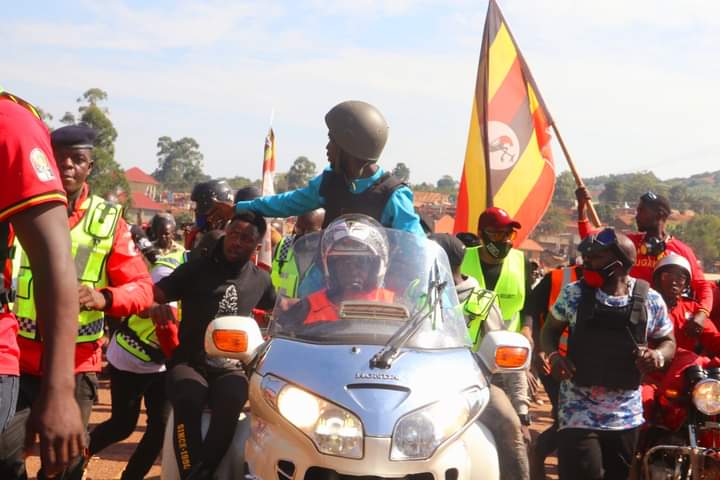 Former presidential candidate Kyagulanyi Ssentamu Robert aka Bobi Wine of the National Unity Platform has today put the city centre of downtown Kampala to a standstill day after declaration of a peaceful protest.

The musician turned politician who declared a peaceful protest on Monday today afternoon stormed downtown Kampala amid cheering supporters on Boda Bodas and vehicles who gave him company as he debuted his long awaited demonstration. The happy NUP supporters cheered with honks, whistles and vuvuzelas leaving security in confusion.

As Kyagulanyi waded through the city centre, security forces feared to engage him violently. He did not move out of the vehicle despite requests from his supporters. He drove via Kampala road to parliament where he went to attend plenary according to our sources.

“Bobi Wine is our president. We voted for him and we shall follow his directive,” says Mukiibi, a Boda cyclist. “We won the elections but the EC usurped our decision and declared Tibuhaburwa unconstitutionally,” adds Lwanga Musa, another Boda rider.

Kyagulanyi’s debut move comes a day after he said he had won the general elections with 54.19%.