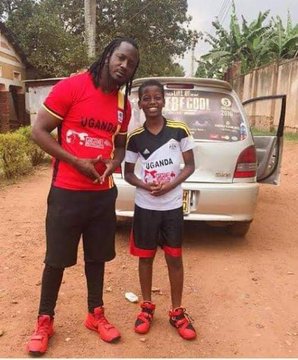 NRM leaning musician Moses Ssali who is known for his stage name Bebe Cool has cried out to the first lady, Janet Kataaha who doubles as the Minister for education tasking her to make special arrangements so that his son, Alpha Ssali can sit for the exams he missed.

Alpha and 7 others who participated in the Afcon under 20 tournament missed their Uganda certificate of education examinations as they represented the country up to the finals which they lost to Ghana Hippos.

Bebe Cool has spent his entire Thursday ranting on Twitter issuing numerous threats including falling out with a government he has loved from his infant age.

“Disappointed with @UGgov that they’ve decided against giving boys who repped Uganda at U-20, U-17 tourneys a second chance of sitting for their S4 final exams. As a father of one of these, I’m pained,” he posted on his Twitter page.
“I urge Min of Education @JanetMuseveni to review the issue. Call parents of the 7 kids & forge a way 4ward so next time this happens, there’s a plan to support national team players and by this our players won’t lose out on education,” he tweeted again.

However, Ugandan netizens who have invaded his tweet have lashed out at him for persistently ignoring cries of his supporters who abducted on a daily for political reasons. Some have even urged UNEB not to succumb to impunity or else they may face legal implications if they offer Bebe Cool’s son a special examination time table.