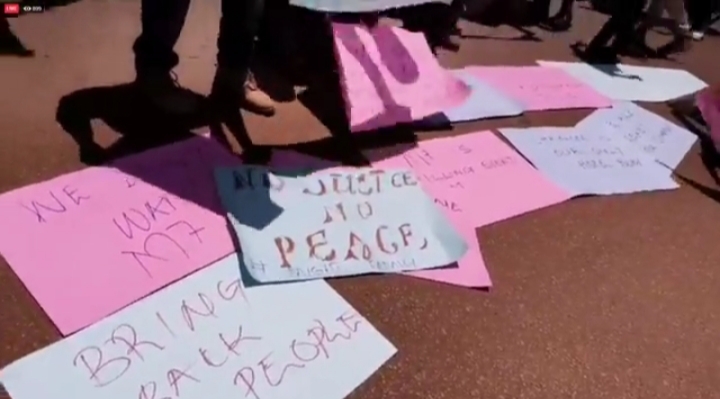 On the debut day of the protests sanctioned by the National Unity Platform party president Kyagulanyi Ssentamu Robert aka Bobi Wine, scores of arrests have been made.

SEE ALSO: Enanga: We have Bobi Wine in our custody

Enraged groups of protesters armed with placards inscribed with wordings decrying the wave of arbitrary arrests and the spate of abductions stormed various locations of Kampala.

In the central business district of Kampala, Bobi Wine was accompanied by the NUP MPs like Hon. Joel Ssenyonyi of Nakawa, Nyeko Derrick, Kabuye Frank Kibirige and several councillors from the 5 divisions of Kampala.

Another group of youths stormed the United States embassy in Nsambya, Makindye division. They chanted and cried out to the US tasking its ambassador to act as the voice to the Biden administration. The youths rallied the US embassy to rein into the killings being presided over by the repressive regime of Gen. Yoweri Kaguta Museveni.

The police cautioned the general public and urged them not to fall prey to the protests. Paul Lokech said, “There is no government that can accept such impunity and lawlessness to flourish. If somebody thinks this is a failed state to play around with, you are wasting time.”

By the time of filing this report, Hon. Kyagulanyi had been dragged back while Joel Ssenyonyi and other legislators were being driven to Jinja road police station. Though no official number has been availed, this site has reliably learnt that there are hundreds who have been piled in the cells of several police stations around Kampala.