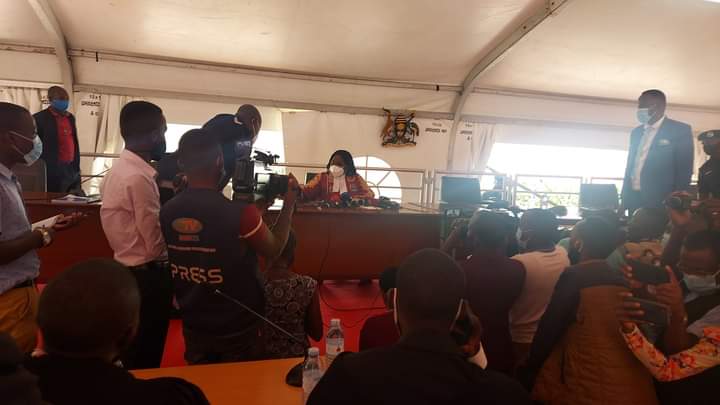 There was unprecendented drama in court this Thursday evening after the Chief Justice Alfonse Owiny Dollo decided to hide the verdict of one of the judges anticipated to have had a contradicting ruling.

However, the judge had purposefully duplicated the verdict and instead decided to give a dissenting (disagreeing) Judgment to that of her 8 other colleagues who ruled against Bobi Wine’s Petition.

Court security/officials without shame confiscated her file which contained her ruling so that she doesn’t read it to the media.

The Attorney General and all other lawyers representing Museveni and NRM walked out of Court in protest of Justice Kisakye’s ruling.

The Chief Justice and his 7 colleagues also joined the fleeing crowd and walked out. Justice Esther was left at the ‘Bench’ seated alone and insisted that they give her the file to read her ruling.

She said on record that her file had been confiscated on the orders of the Chief Justice!

The Public Address System, and electricity, were later switched off, and all other Court officials withdrawn! Security was called to order journalists to vacate after deleting the records of the scuffle. Those who defied were threatened and temporarily detained at the court cells.