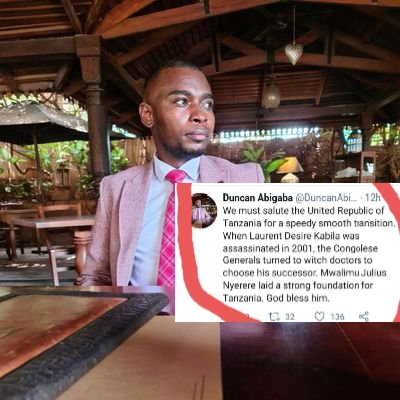 SEE ALSO: Block my inauguration at your own risk, Museveni warns NUP

In light of events and assessments of the short lived 5 year tenure of fallen Tanzanian president John Pombe Magufuli versus the 36 years of Mr. Yoweri Museveni, Abigaba agrees with NUP that Uganda indeed deserves a transition. For the very first time, Duncan even close to criticising the Ugandan despot and nearly agreed with the NUP ideology as from juxtapositions of Magufuli’s legacy, he instigated that Museveni’s 4 decade overstay has not benefited the country. In the tweet he published a day back, Duncan clearly advocates for progressive ideas which can only be realised through a transition of leadership from Museveni’s generation to a much younger Kyagulanyi era.
“We must salute the United Republic of Tanzania for a speedy smooth transition. When Laurent Desire Kabila was assassinated in 2001, the Congolese Geners turned to witch doctors to choose his successor. Mwalimu Julius Nyerere laid a strong foundation for Tanzania. God bless him,” Abigaba tweeted in a direct attack on his boss, Museveni.

Abigaba has been a sworn critic of NUP as evidenced in his tweets where at one point he even disowned a bedridden Ghetto TV journalist as a non member of the Red Pepper publications.

In the 5 years of his tenure, president Magufuli according to the Saturday Monitor, invested in the standard gauge railway, worked on major highways, established a bus system for Dar es Salaam, built 96 hospitals and over 400 health centres, increased connection to the national power grid to 80% and transformed Tanzania to a middle income status. He most importantly achieved all this without getting any Chinese or Western loans.