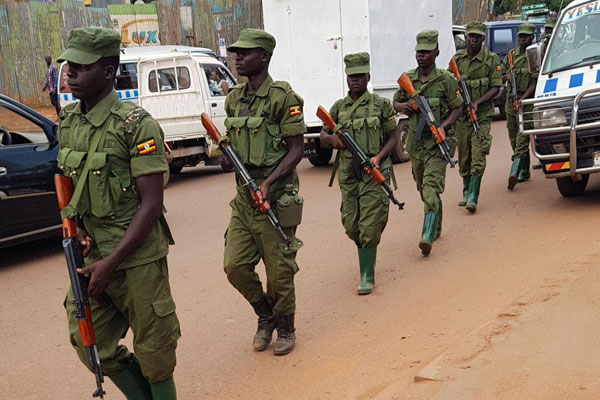 In a bid to minimize gun violence and crimes of aggravated robbery, the Uganda People’s Defence Forces have in a statement unleashed plans of disbanding the Local Defence Unit personnel. This is somehow related to the silence of the NUP supporters who were anticipated to lead demonstrations on the streets of major Ugandan cities but on the contrary peace has prevailed.

The move also comes after the force has routinely indulged in armed violence on citizens. The network of crimes and murder of mobilie money operators and cattle rustling in the Karamoja subregion have all been pinned out as case studies justifying the disband of the notorious force.

Maj. Gen. Peter Elwelu says as the UPDF, they are in discussions to resume the phased disarmament process and also streamline the Local Defence Unit following investigations linking them to the escalating gun crime.The process is expected to take a period of 3 months.

Political analysts however say the disband is linked to the politics whereby the role for which the force was formed is no more. “The main agenda was to man the 2021 general elections where the government expected violence,” Ochaka, an analyst says. “With the dust beginning to settle as calmness is being achieved, the regime does not see their (LDU) relevance anymore. But I’m certain they will be recalled to duty in case another political tension heats up,” he adds.

John Lokol one of the affected members of the force says phasing out LDUs will leave majority of them redundant. “Where shall we go when we are retired back to the communities?,” he asks. “How will we survive. I would at least urge goverment to retain the force and keep it as a reserve,” he adds.

Over 15,000 were recruited in a scheme initiated by the president’s brother, Gen. Salim Saleh who had anticipated a chaotic election. Each of the LDU personnel earns about 230,000 shillings as a monthly payment and is entitled to free accomodation in tents at police and army barracks.

Over 300 Ugandans have died at the hands of the LDU in their reckless notoriety and gun bullying. The latest victim is a teacher who was shot and killed on Sunday in Munyonyo, an upscale Kampala suburb. The force’s notoriety compelled the UPDF to take the recruits back to a training process where human rights was a core discipline. This refresher course however did not yield as the rampage persisted.