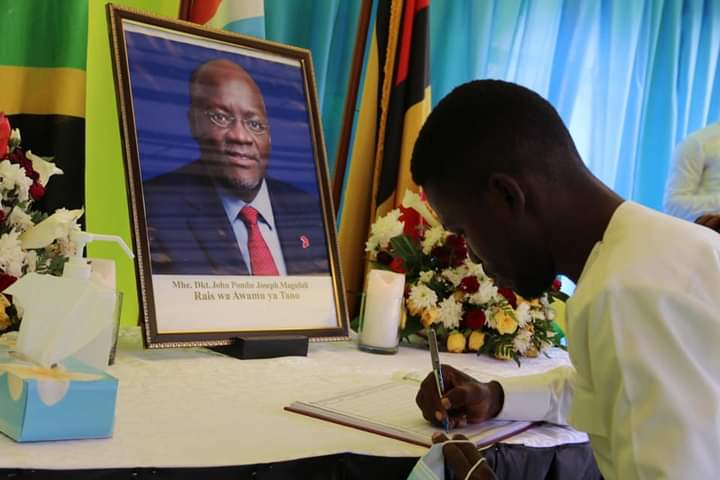 Bobi who visited the Tanzanian high Commission this Thursday afternoon commended the fallen Tanzanian leader for exhibiting extraordinary leadership in the short period he ruled the East African nation. Bobi used the chance to lash out at the incumbent president Museveni whom he says has ruled the country for over 35 years but has not even achieved a quarter of what Magufuli did in 5 years. “You don’t have to be in power for very many years. Magufuli ruled for a very short time but ensures that his country transforms to a middle income economy,” Bobi said.

Moments after visit, Hon. Kyagulanyi explained through his Facebook page what was involved in his discussion at the Tanzanian consul. President Magufuli’s body will be laid to rest at his ancestral home in Chato this week. The body has already arrived amid a poignant mood.

We went to the High Commission of the United Republic of Tanzania in Uganda where we signed the condolence book for the late President John Pombe Magufuli. President Magufuli was not perfect, but he loved his country and his people. In only six years, he turned the fortunes of his people around and proved that one does not need to be in power for 30 or 40 years to develop a nation.

We celebrate the fact that in the face of this incredible tragedy, Tanzania has kept to its tradition of peaceful transfer of power from one leader to another.

We hope that the new leadership of Tanzania will continue where President Magufuli stopped in terms of the development agenda, but also work hard to improve the enjoyment of rights and freedoms, especially for the opposition.

May his soul rest in peace.