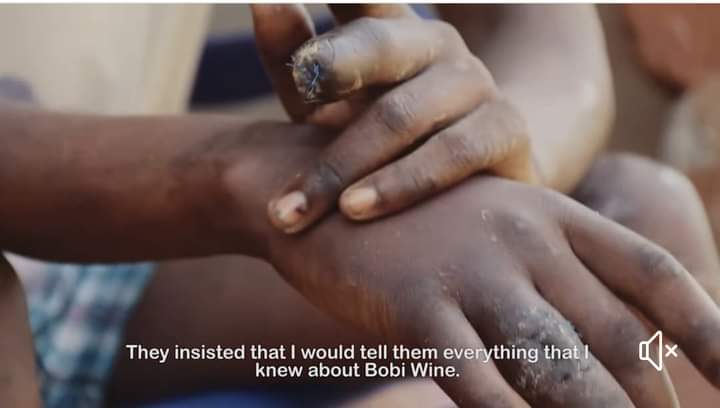 On Monday evening, the National Unity Platform party president Kyagulanyi Ssentamu Robert aka Bobi Wine shared on his Facebook platform, a human interest and tear triggering documentary of one of his supporters who faced the wrath of the brutality of the Ugandan armed forces.

With more abductions silently ongoing without ample press coverage, several youths suspected to have supported the opposition remain under attack by security forces. Like in the apartheid South Africa when the colonial forces would hand pick younv black Africans from their homes in Soweto, Bobi Wine supporters too are scooped out of their homes and work places and bundled onto waiting tinted vans and driven off to unknown destinations.

When one watches that troubling tale of abduction and grave torture of Mr. Segawa Ronald, 22, a casual worker who was beaten to near death, one wonders why the government revived elective politics when it has no space of tolerance for the dissent.

Ssegawa tearfully recounts the worst forms of torture inflicted on him by his heartless captors. He demonstrates the scars tattooed on his body, the markings of the beatings and the plucked out nails are symbolic of what ensues behind the walls of safe houses and government detention centres. Ssegawa’s crime is just appearing in a video in which he encouraged Ugandans to vote for Kyagulanyi in the election.

“Watching the young man narrating that sad story leaves you with no option other than tripling efforts in ending this madness. For God’s sake how would someone do that to a fellow human being. Where did Empathy Go. Where did Humanity Go. Which country are we In. These guys need to be arrested as soon as Yesterday,” comments NUP supporter, JB Muwonge.

Although Ugandan security forces have remained reluctant to admit that they are behind the abductions, all the available evidence points back at them. The consistent descriptions and confessions by survivors and former abductees all show that it is related to the state crackdown on political dissent.