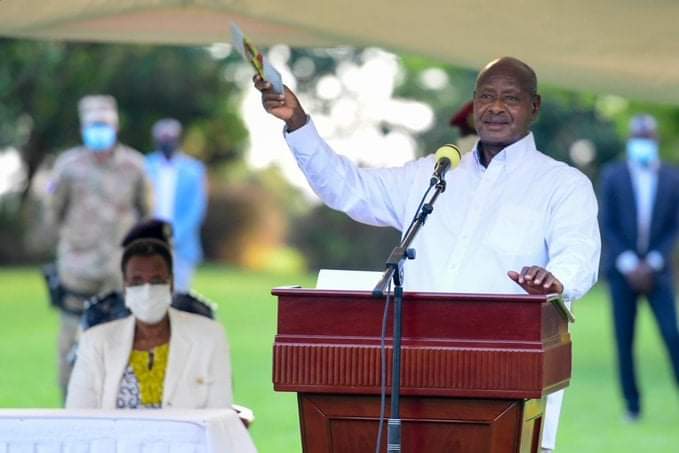 In a meeting presided over at State house Entebbe on Tuesday where the Inter-Religious Council led a group of ‘remorseful youths’, Museveni made bitter remarks castigating Bobi Wine for allegedly ‘misleading an entire generation’.

“I met a group of angry youths who did not support my presidential ambitions for the 2021 polls. These young men and women were misled by their leaders to join demonstrations and disrupt our peace,” Museveni said. “I comforted them after awakening from a bad dream because we were also ready to handle them. I thank them for seeing light by denouncing violence and I’m happy that they want to work with me,” he added.

Museveni also commends the IRCU for leading the harmonization efforts. “I thank the Inter-Religious council for rehabilitating these disgruntled youths and changing their mindsets back to productive work,” he said. “We are going to support these young people in their entrepreneurial ventures and also give them scholarships to go and study,” he added.

It should be noted that for the first time in Museveni’s 3 decade rule, the youths have actively participated in the politics of Uganda, courtesy of Hon. Kyagulanyi Ssentamu Robert aka Bobi Wine, a youthful musician turned politician who inspired the young generation into joining the governance of their nation. Wine scooped 35% of the total cast vote according to the Electoral Commission while Museveni scored 58%. Bobi however disputes the tally clearly putting it that he won with 54.19%.