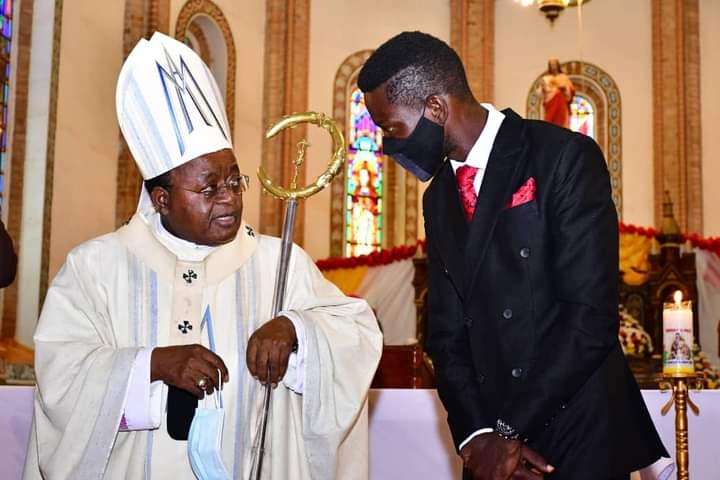 The former presidential candidate Robert Kyagulanyi alias Bobi Wine on Saturday of 27th August 2011wed Barbara Ithungo at Rubaga Cathedral Kampala in Ceremony Presided over by now the late Archbishop Cypriana Kizito Lwanga.wedding Mass started at 10:00am ant ended at 1:00pm. On this very but in 1999 is when Kabaka of Buganda Ronald Mwenda Mutebi wedded Nabagereka.

Bobi and Barbie’s wedding is considered as the most loved,colored,expensive,cultured. The 500 million UGX ceremony captured a lot of people from all corners of Uganda and beyond especially in the ghetto where Bobi draws his inspirations.

The late Archbishop Lwanga and Bobi Wine have a long history. The late has been Bobi Wine’s spiritual guardian. Its sad that Bishop Lwanga was found dead in the house alone. On many occasions he has stood up to talk about the ills of Yoweri Museveni’s dictatorship.

There has been rumors that ever since Bobi Wine made his presidential ambitions clear, Yoweri Museveni went into panic and he ordered for an intelligence collection on the NUP boss. Yoweri Museveni was shocked to find out that calm singer’s marriage had been presided over by the country’s Archbishop in the Catholic faith. Archbishops usually preside over marriages of individuals from high profile families. According to a highly placed sources in state house, while chairing over a security meeting at state house Yoweri Museveni wondered “…who is this Bobi Wine that he so special for the Archbishop to preside over his wedding…?

Its a public secret that Yoweri Museveni is working so hard to fight religious leaders who seem to be neutral in their words and actions. And those who have resisted to accept bribes from him have been subjected to public humiliation or meeting mysterious death.

Today while speaking at Rubaga Cathedral, Bobi Wine has asked for an independent investigation on the cause of the sudden death of Archbishop Lwanga.