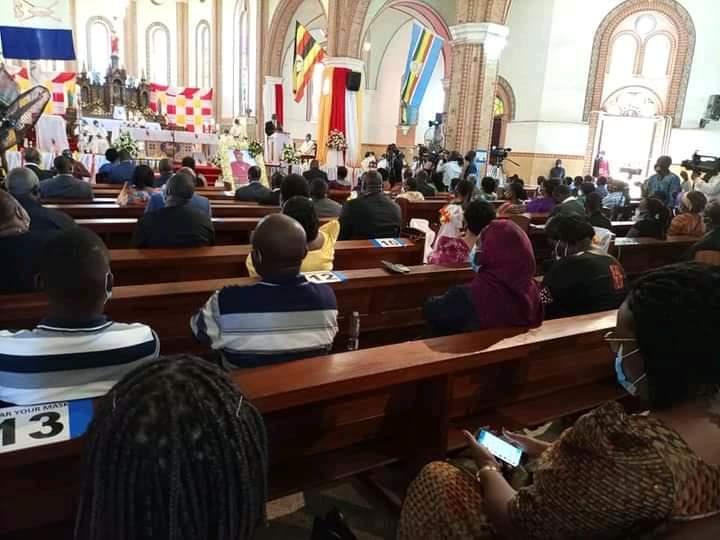 The elite presidential guard dubbed the Special Forces Command which protects president Yoweri Museveni has been deployed at Rubaga Cathedral where a requiem mass of the fallen Kampala Archbishop Dr. Cyprian Kizito Lwanga is underway.

This timid move instigates that government seeks to collect the views of the attendants of the mass regarding what they think could have caused the untimely death of the spiritual leader.

The mass which has attracted masses and hordes of politicians from the ruling government and the opposition is being viewed as a centre of conflicts. This follows the opposition and the clerics persistence that thd Archbishop was too healthy to suddenly die in unclear way.

According to a credible security source quoted by this reporter, Museveni does not want the Catholic church to ride on assumptions that their Archbishop was smartly ‘poisoned’ which is why the SFC in plain clothes have been littered within the congregation and outside the Church premises to keenly listen to the messages that will be uttered by both political and religious leaders.

Dr. Lwanga who was appointed on that position on April 8, 2006 will be laid to rest on the same date this year (April, 8, 2021) according to a communication by the Rubaga Cathedral.

His would be Easter speech if he was alive

In an excerpt sourced from his would he speech, the Archbishop was hesitant on calling for the release of Bobi Wine supporters. “As we celebrate the resurrection of Jesus Christ, we call for the unconditional release of many young people who are being held in various detention centers without being taken to cour,” part of Archbishop Lwanga’s would-be Easter speech reads.