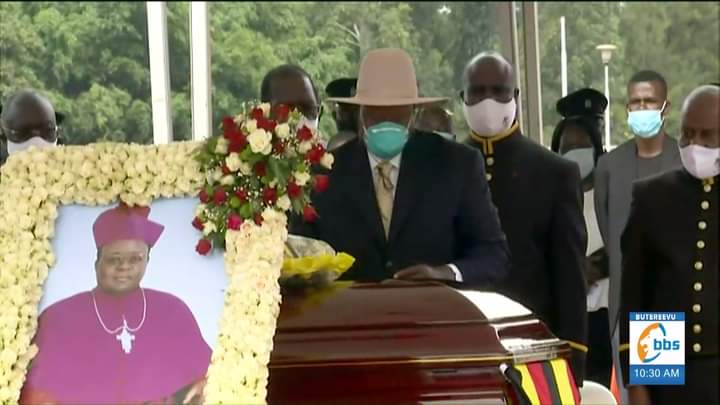 The fallen Kampala Archbishop Dr. Cyprian Kizito Lwanga has been accorded a state of honor funeral which is apparently ongoing at the Kololo independence grounds.

Hordes of government officials like the president Yoweri Museveni, his wife Janet Kataaha, the Speaker of parliament Rt. Hon. Rebecca Kadaga, the prime Minister Ruhakana Rugunda, Information Minister Nabakooba Judith, Minister for presidency Esther Mbayo and several others are all in attendance.

Controversy manifested when president Museveni and his wife stood up to lay a wreath on the casket of the fallen Archbishop. When they tried to put the bouquet of flowers on the casket, the Ugandan flag was slipped off by a swirl of wind leaving the fountain of honour in total shock and embarrassment.

Spiritual leaders have interpreted the scene as a rebellious act by the deceased Archbishop Lwanga whose soul is perhaps protesting specific elements that could have harmed or wronged him in the time he still lived.

By the time of filing this report, the fallen cleric was being accorded a gun salute by the UPDF as a gesture of appreciation for his contribution to the nation.