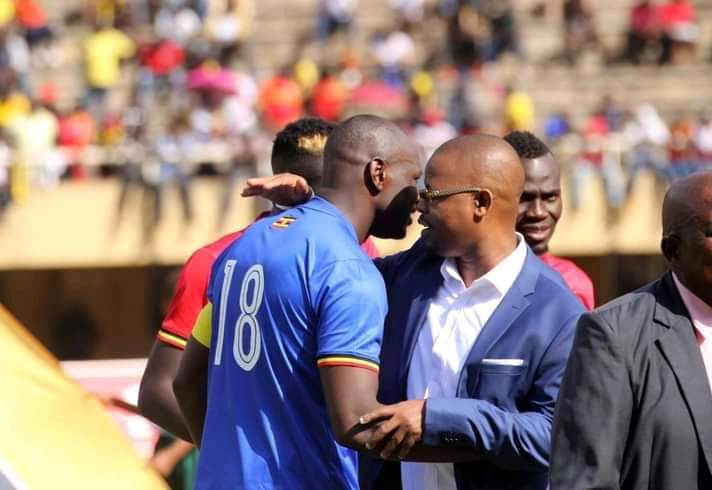 It is turning from bad to worse for Magogo Moses-FUFA President after the cranes Captain criticizing his actions of undermining players and failure to pay the player’s allowances and bonuses.

Cranes Captain was unhappy after Eng Magogo publicly criticising the Cranes’ performance at the African Nations Championship (CHAN) in Cameroon and for what happen to his former teammate Mike Mutyaba who was beaten up at the Federation for demonstrating peacefully.

Magogo termed Uganda’s performamce at the January tournament as ‘shitty’ as he tried to quell concerns over why the team were denied allowances. The above statement from the FUFA head, has angered many including the Cranes skipper Onyango.

“Magogo’s public criticism of the players who played at CHAN was uncalled for,” Onyango said in an audio that was making rounds on whatapp.

“It was just a matter of coming out with an explanation because the truth is FUFA owes them the money,” he added.

“I was also told that the federation did not give these players the jerseys they used at the tournament, that is being unprofessional,” the Mamelodi Sundowns goalkeeper continued.

Adding to the above Onyango also revealed that of the UGX 10 billion the government allocated to the football governing body in this financial year, 50 national team players whose names FUFA submitted were entitled to one million shilling monthly.

But according to the 35-year old, it seems they have not been receiving the money as we approach the end of the financial year.

“Mike Mutyaba has just exposed them, yes they embezzle players’ funds that is the truth because national team players were supposed to be paid one million shillings each monthly but all in vain,” he revealed.

After coming out to peacefully demonstrate on behalf of other players regards the financial matter, the retired Uganda Cranes player, Mutyaba was manhandled at the federation headquarters in Mengo on Friday.

Having failed to qualify for the forthcoming Africa Cup of Nations finals due in Cameroon next year, Uganda Cranes will now focus on the 2022 World Cup qualifiers that get underway in June 2021, a campaign Onyango insists he will not be part of.

“I do not know who will play for him (Magogo) in the World Cup qualifiers because me I do not have the time for that,” he stated.

“I am really tired of making money for those FUFA guys, let him (Magogo) start another team and we see those who do not play ’shitty’ football and make the money for him,” Onyango concluded.

With only two months to go until the Cranes take on Kenya in their first World Cup qualification game in Group E, we wait to see whether Onyango meant his words.