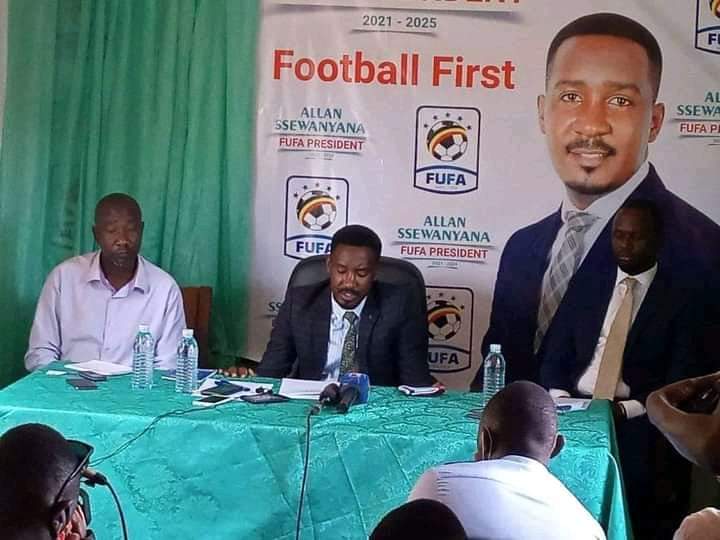 Renowned MP Allan Ssewanyana has entered the race to become the next Federation of Uganda Football Associations (FUFA) President.

Ssewanyana made the official announcement on Monday at his offices in Makindye. His announcement comes in the wake of Moses Magogo’s confirmation that he will return for the third term.

“I am presenting myself as a candidate for the position of FUFA President at the next General Assembly. We must make football an enjoyable environment for every stakeholder including myself, players, investors, coaches, sponsors, media and fans,” Ssewanyana told Journalists.

Mujib Kasule is also expected to announce his bid for the FUFA seat on Tuesday.

Ssewanyana also used the opportunity to ask Magogo to step down and not bother to stand again as FUFA President.

In his remarks, he reminded the journalists about his petitions he made in 2017 against Magogo on resale of the 2014 World Cup tickets.

“Magogo entered a plea bargain under article 67 par.1 of the FIFA code of ethics. This means that he pleaded guilty and was banned from football for the next two months. However, he attended a football match between Uganda and Malawi during that same period. I petitioned FIFA again and we are still waiting for their decision,” Ssewanyana added.

“Through my lawyers, I also locally petitioned Sports Minister Hon Janet Museveni who then ordered the IGG to investigate the resale of the World Cup tickets. Despite Police recording my statement in presence of my lawyer, nothing has been done.”

Ssewanyana, from the above background, says that Magogo should not run for office again in August.

“He is a convict under the FIFA code of ethics statutes and served both sentences. His tenure prior to the conviction was marred with corruption. He has failed to stir FUFA ahead of these legal battles. FUFA is not transparent and laws are only made to close out any possible challengers to presidency.

“He should step aside at the end of his tenure as he is still under investigations.”

Ssewanyana also commented that he has instructed his lawyers to file a case if accountability is not given within seven days.”