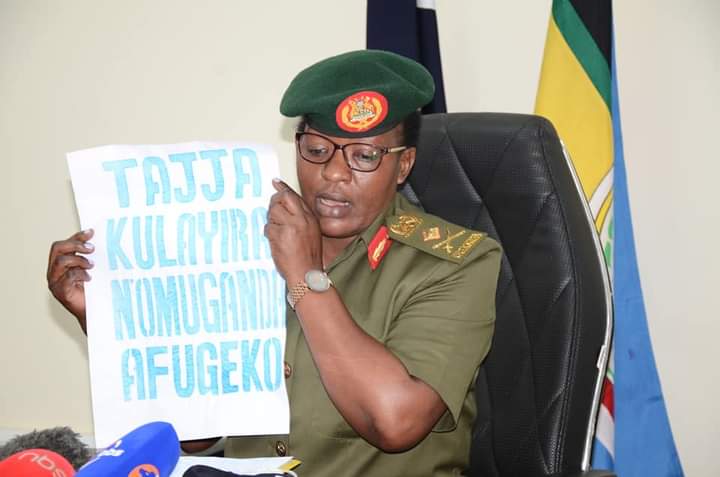 The UPDF spokesperson, Brig. Flavia Byekwaso says they have landed on a plot by supporters of the National Unity Platform party planning to disrupt the inauguration ceremony of Gen. Yoweri Museveni slated for May 12.

Addressing journalists at the weekly security briefing in Naguru, Kampala, Byekwaso boldly accused NUP of failing to concede defeat to the NRM party which she says won the 2021 polls as per the official EC declaration. “We are ready to crush those hooligans who want to incite the general public,”Byekwaso vowed. “They are planning to disrupt our peace and make the city ungovernable. We shall deal with them decisively, ” she added as she demonstrated one of the alleged retrieved posters inscribed with wordings of hateful and sectarian messages.

Byekwaso added: I would like to bring to your attention the continued hate speech by a section through the help of foreigners. Recently they are saying they are going to interrupt the swearing-in of the president-elect come 12th May 2021. We are all aware that the president of the Republic of Uganda has warned against tribalism and sectarianism. As security forces, we will fight negative propaganda. Any person who stands in the way of peace will be dealt with decisively. Ugandans are urged to desist from such because they are not productive. We urge those who are planning for such to stop because we are aware and know where they are.”

Byekwaso’s reiterations were backed by the police mouthpiece Fred Enanga who also said his institution had way back landed on a similar ploy. “We have been aware of what NUP has planned over time,” Enanga said. “But we are working round the clock to frustrate their planned sabotage,” he added.