ISO to M7: Bobi may swear self as president 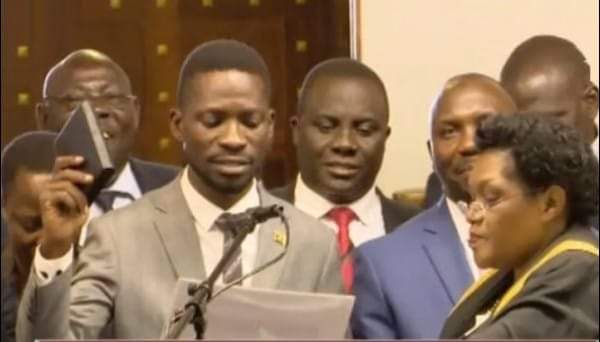 The Internal Security Organization spies have claimed that the National Unity Platform boss Hon Robert Kyagulanyi together with his party are planning to take their struggle for power to yet another level. This time, according to ISO intelligence, NUP are preparing an inauguration ceremony where Kyagulanyi will be sworn in as President D-Day to the official swearing in ceremony by President Museveni on the 12th of May at Kololo Independence grounds.

SEE ALSO: I was to return to the bush if Bobi won-M7

Kyagulanyi who claims to have won the January 14th polls with 54.19% is also expected to traverse the whole country to thank his voters reaching the climax of the events with a swearing in ceremony in Kampala.

In 2016, FDC’s Dr Kizza Besigye took the same path as he sworn himself in only Police to disrupt the ceremony by arresting him and some of the politicians who had attended the ceremony.

According to Mr Rwamirama Douglas a city lawyer, it is a treasonous act to swear yourself in as a president of this country an offense that can lead you to life time imprisonment.

He adds that Besigye was not charged for treason for the offense because it was something new that was happening in the country and thus the courts would not sentence someone for life imprisonment.

However according to Dr Besigye, he said that Museveni feared taking him to court because he knew Besigye had all the evidence that he won the 2016 election.

“I infact asked them to sue me to the courts of law but they refused because they knew I had evidence that I had won the election. How I wish they had taken me to court for that matter.” Besigye said