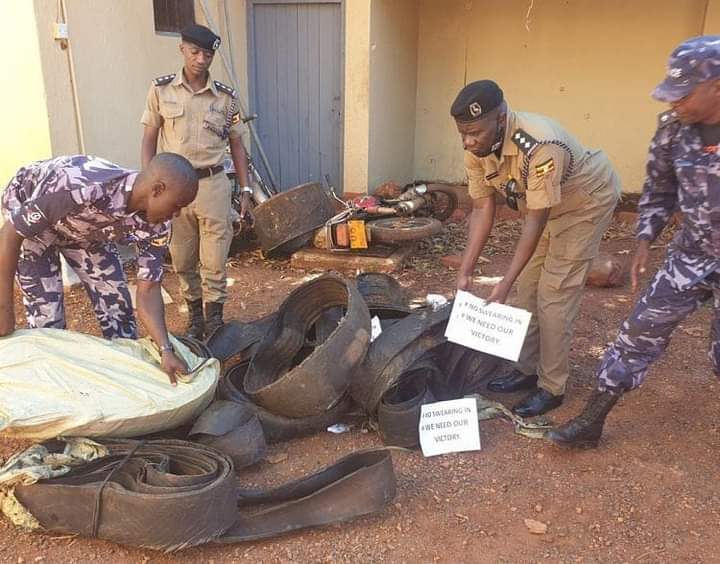 Police in Jinja on Tuesday noon opened up to Byekwaso’s ‘Tajja Kulayila’ narrative after some of the plain clothed CID detectives disguised as criminals and freely set tyres ablaze without any security intervention and walked away scot free.

The move came just a day after the army spokesperson, Brig. Flavia Byekwaso claimed that they were to beef up security in a bid to engage the opposition youth groups planning to sabotage the inauguration ceremony for president Museveni slated for May 12.

According to reports by NBS journalists as per the eye witnesses they interviewed, the alleged perpetrators who scattered the leaflets and tyres they set ablaze were freely travelling on a motorbike. This raises eyebrows in a sense that Jinja city has a full fledged 24 hour CCTV surveillance system that would have detected the said culprits riding on the streets and freely setting fires.

“We have started serious investigations since these people tried to burn the city using improvised petrol bombs,” remarked Abbey Ngako, the Kiira regional police spokesperson monents after the ‘attack’. Like Brig. Byekwaso, he too failed to account for the retrieved posters that looked fresh as new.

It should be observed that security forces are fond of creating their own decoys in a bid to attract huge budgets. During the tenure of Gen. Kale Kayihura as IGP, women would increasingly be murdered whenever his contract would near expiry. The machete gangs too would be on a spree. But all this would immediately cease with a stroke of a pen renewing Kayihura’s contract, something that raised concerns amongst analysts.