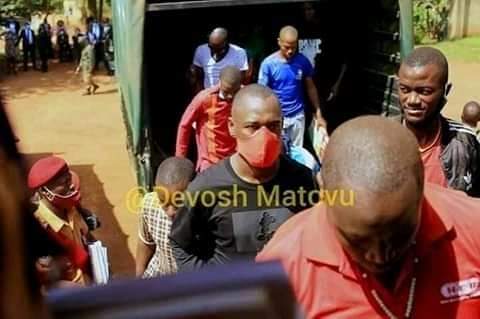 SEE ALSO: You have no power on Kitalya, Baine tells off MPs

Last week, the Human Rights Committee of Parliament visited Kitalya government prison to assess the conditions of inmates there. This came after we repeatedly raised complaints about the sickening conditions at the facility, including terrible food, congestion, poor sanitation, lack of water, physical and psychological torture, etc.

At the meeting with the Human Rights Committee, Nubian Li spoke on behalf of our brothers and sisters there and recounted all the humiliation they have been subjected to since they were arrested on 30th December, 2020. He handed to the Committee a handwritten petition about the sickening conditions at the prison.

As soon as the Members of Parliament left, the prison officers promised to deal with Nubian Li and other comrades who spoke.

Later that day, deep in the night, power was switched off and several men came to Nubian Li’s ward. They ordered him out of the ward and violently took him to a place he did not recognise for two days. His captors told him they had orders from the OC of Kitalya, one Bitariho Onesmus, to punish him for speaking to the Committee about the evil that goes on behind the walls of Kitalya. This is the same man who issued orders against me and some other leaders never to be allowed at the prison, after we spoke out against the gross violation of rights there.

A day before the Committee visited, they had removed many inmates and taken them to other prisons so as to claim that the prison is not congested.

After a full day of not seeing him, the rest of our comrades protested and demanded for the return of their leader (Nubian Li). He was brought back to the prison two days, but ordered not to stay with our comrades moving forward. He was instead taken to a ward where hard core criminals are imprisoned. Amongst the people he lives with now is Musa Musasizi, the man who was recently arrested for allegedly killing several women after sleeping with them. As for our other comrades, they have also been persecuted in all manner of ways after the interaction with the Human Rights Committee. Previously they were living all together, but now they have been scattered in different wards to prevent them from associating.

The military court fixed their next bail hearing on 10th May, two days before Gen. Museveni illegally swears himself in. The regime’s intentions are quite clear.

Despite the torture and humiliation, our comrades are still committed to the struggle for which they are paying an incredible sacrifice. Continue praying for them and demanding for their release. Many of them are sick, and not receiving adequate healthcare.