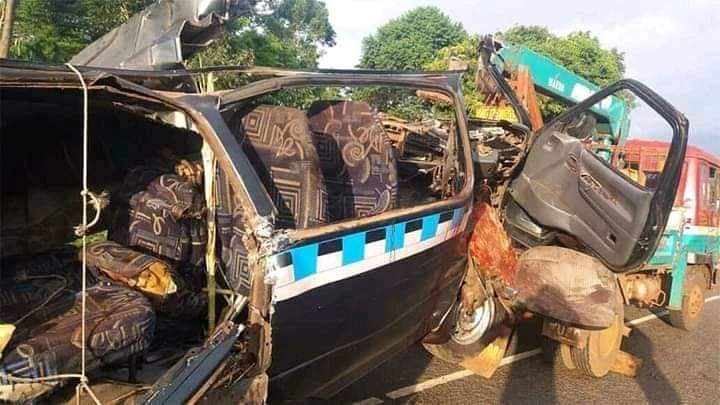 After hours of speculations and controversies, the Uganda police force have finally given their account of the nasty Kyabakuza accident in Masaka district which claimed over 14 lives on Thursday early morning hours. Below is their detailed report;

Fourteen people have been confirmed dead in the morning fatal accident on Masaka – Mbarara highway after a head on collision involving a commuter taxi and a trailer.

The accident happened at 7am.

A Tanzanian trailer registration number TH77 BVW / T433 BDY Mercedes Benz collided with a Toyota HiAce registration number UBE 995C that was coming from Sembabule-Matete to Kampala. The trailer driver was overtaking on the wrong side of the road.
14 people died on spot that included 5 females, 2 male juveniles and 7 male adults.
Only one person has been identified as Galambe Francis, 36 year, a resident of Buyoga village Kayunga Matete Sub County, Sembabule District.

Efforts to identify the 13 victims is underway since none had any identification documents on them.
The bodies of the victims have been conveyed to Masaka Regional Referral Hospital for Post mortem examination.

We urge all road users to take cognizant of existing road safety measures.