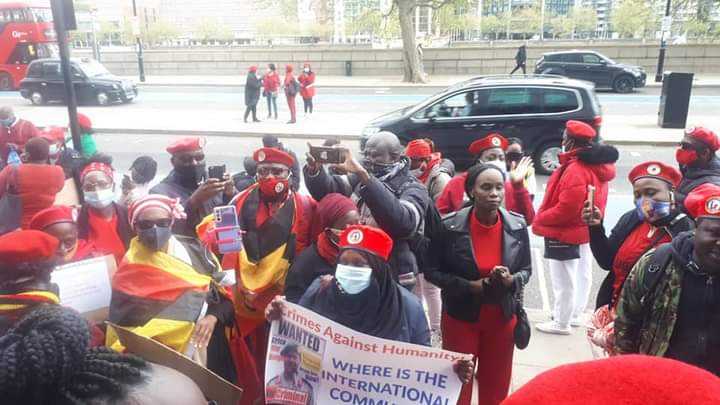 The trend of storming Ugandan embassies in the European countries is silently picking up. For the past weeks, the Ugandan embassy in the London based Trafalgar square has been targeted by enraged protesters calling for the step down of president Museveni who they say didn’t win the contest.

The protests are inspired by the brutality unleashed by security forces on Ugandans during the just concluded process. Ms. Patricia Ssewungu, a vlogger and political analyst at Ekyooto says that it is not right to back down at a moment when the country is ‘bleeding profusely’.

Ugandans all over the world are speaking and the world is watching. A very big thank you to our United Kingdom 🇬🇧 diaspora team for staging a powerful protest yesterday in London. Let the world know that Uganda is bleeding. Thank you for speaking out on behalf of our people who are rotting in jails and torture chambers. It is activities of this nature that weaken and eventually bring down dictators. Gen. Museveni is fully aware of this, and that is why he has to spend our money on lobbyist firms in millions of dollars. Super proud of all of you Ugandans abroad who continue on the path of the struggle for freedom and democracy. The dictator will make every effort to divert us, discourage us and derail us. He has been at it for a long time because he knows how dangerous we are as a united and determined front. Thankfully he has not succeeded in the past and he will not succeed moving forward. We have one duty, and that is to our nation. In the end, we shall surely emerge victorious.