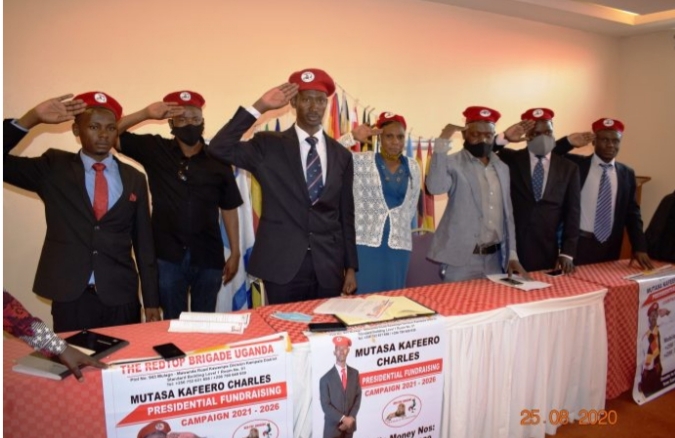 At the peak of the midweek, the NRM party chairman Gen. Yoweri Museveni met a group of youths claiming to be coordinators of the opposition National Unity Platform party. Credible sources say this group which also dons in red berets was mobilized by a one Mutaasa Kafeero, the ring leader of the now unpopular Red Top Brigade. Kafeero on record has always been opposed to the leadership of People Power which he claims to have hijacked the red colors and the beret that were identical to the ‘Red Top Brigade.’ This unit was very vibrant in the 2016 general elections where it used to identify with the FDC party presidential candidate Rtd. Col. Dr. Kizza Besigye.

SEE ALSO: Bobi Wine: our plans to unseat dictator Museveni are on

A clueless Museveni accepted the meeting thinking he was meeting the “Tajja Kulayira” mobilizers, a campaign coordinated by ‘Time Is Now’ pressure group based in South Africa, with members in Uganda.

According the South African based coordinator Khalid Kaka, Mutaasa and the NRM government’s intention are believed to be frustrating the nationwide protests, organized by Time Is Now on the 12th of May. The group has been carrying out clandestine mobilizations and trainings in different parts of the country with external support from civil society groups in Kenya and South Africa.

In February 2021, “Time Is Now” made calls to Ugandans to fight for “their” victory. It was revealed that the group has been training activists in civil disobedience way back before elections. The trainings were said to be conducted a neighbouring country.