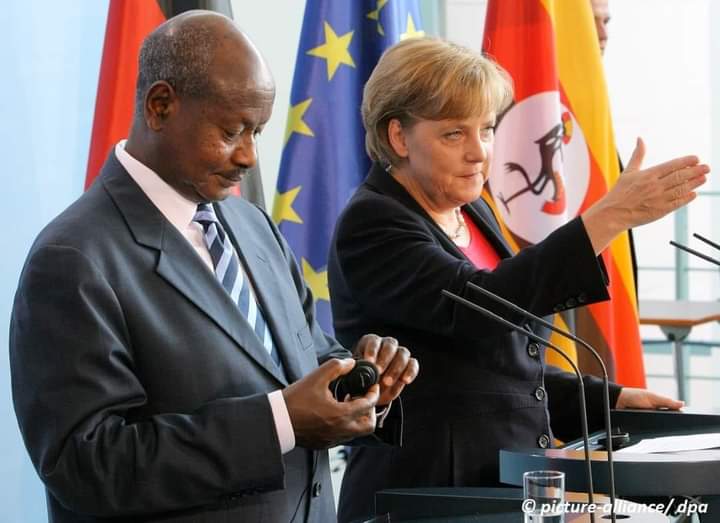 According to Angela Merkel the chancellor of Germany through the German Embassy Kampala and a big majority other murders they believe Uganda had a very successful and most peaceful elections. According to them, its very important that they congratulate Dictator M7 for the elections frauds and murders. Actually according to Merkel the Ugandans in the photos below are celebrating the win of M7 in the recent concluded 2021 general elections. Indeed they are so happy that they fainted.

Its hard to say, but Merkel and her German government are extending what we have been talking about, M7 is a colonial puppet who’s serving the intrests of oppressors of Africans. If Merkel was serving in the German government of the 1930s, she would be doing the same thing Hitler did. Killing millions in gas Chambers. Because when M7 was busy murdering Ugandans, Germans were giving the police and Miltary hardwares and armo to continue the killing spree. They actually made it fun fir themselves. The cameras the military used to record NUP Supporters on Bobi Wine rallies were donated by the German Embassy in Kampala. The same footage is being used to identify whom they should kidnap and torture to death next.

We can’t blame them much, they are doing what they have a history about, killing millions in concentration camps just like M7 did in Northern Uganda for 20 years.

When Merkel meets with M7 its murder in the house remix. She funds the murderer and he will make her a BBQ using innocent Ugandans bodies. Enjoy the stew Merkel! Should he serve you on the Luwero skulls or you like it better with Teso train trailer skulls. Oh I had forget you might like it better with Kasese children and pregnant women’s crushed and burned knee bones and ribs. Ugh! Elweru on the orders of M7 he made a big grill down there in the Rwenzururu King’s Palace. May be you like the recent fresh blood that Muhoozi Keinerugaba gifted you on the 18th to 19th of November 2020. Hundreds were murdered and thousands are being kidnapped, tortured and murdered. Probably you might like better the young boys’ crushed testicle that squeezed, electrocuted and burned using a flat iron, there only crime is supporting Bobi Wine not Dictator M7 who you love so much. Wow!!!

I understand in 2002 you were a leader of opposition in Germany. I guess you have enjoyed the show, if a couple of liters of teargas would be pumped in your eyes and throat on each rally escorted with rounds live armo on your butt, running through your car tyres, By now you would be chancellor in hell. You are so evil. You are disgrace to democracy. Millions of innocent Ugandans are being murdered, thanks to your funds but you got the zeal to congratulate a dictator, an election thief, for murdering and robbing our democratic victory. Very soon you will be cast to the dust bins of history just like any other tyrant kiss ass.

Yours already dead by walking Ugandan.