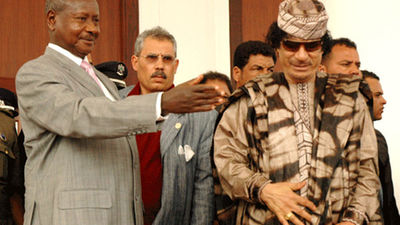 Ugandan dictator and bush war guerrilla warrior, Gen. Yoweri Museveni on Wednesday revealed how he had plans to liberate Libya from aggression by the NATO forces. Museveni confidently made these remarks amid a military display on his inauguration ceremony which occured Wednesday in the capital, Kampala.

“Are you pro-west or pro-east. I told them idiots, I’m pro-African,” remarked Gen. Museveni when reflecting on the 2011 NATO invasion of Libya.

Museveni says he rang the South African president, Jacob Zuma asking him how African armies could unite and liberate Libya from western forces. Museveni says he was dismayed when he saw Col. Muammar Gaddafi fleeing Tripoli.

“First of all the situation of Libya was created by some arrogant actors who undermined the African Union. I can reveal to you, those actors had a narrow escape,” Gen. Museveni remarked. “When they started attacking Libya without authorisation from the AU, I contacted Jacob Zuma. I proposed that African armies would unite and form a joint army to attack those aggressors and free Libya. We were let down by Muammar Gaddafi, who abandoned Tripoli without a fight,” he said.

“Although at that time, I didn’t have direct links to Muammar Gaddafi. I invited the Libyan envoy for talks. I proposed that we lay strategies for hitting their planes down. When the aggressors are deprived of their air power, we would go man to man offensive,” Gen. Museveni said. “I’m neither pro-East, nor pro-West,” he concluded.