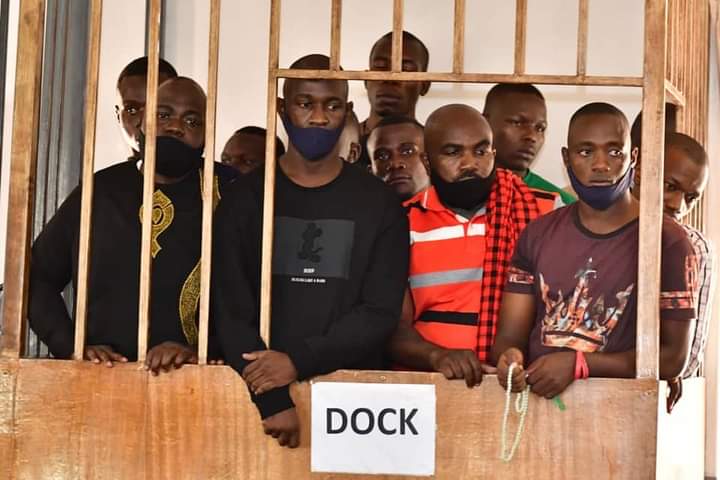 Today, many of us woke up with a lot of hope that our comrades would be freed from illegal detention.

The lawyers have been working hard over the past four months. We had prepared more than the required number of sureties – just in case.

By 8:30am, relatives and friends were already at the court. There were roadblocks all over, as men with red caps patrolled Makindye and its environs.

Accessing the court was a nightmare- whether for lawyers, sureties or journalists. Eventually, a few were let in.

We were told the members of the Court had an early morning meeting, and so we waited, and waited- 9, 10, 11. It was around 11:30am that the lorry carrying the comrades entered the court premises. A military double-cabin track, packed with red-top men led the way, and another came from behind. One after another, our prisoners were led into the cells at the court. There was a moment of anguish, as our comrade commonly known as Map Mediya nearly failed to walk. It was clear he was in incredible pain.

When we eventually got into court, four cases were called first. Unlawful possession of firearms, failure to protect war materials, disertion etc. One after another, they read their charges, or asked them to take plea, or read the court’s ruling. As we waited for our turn, we thought today was the day.

Then the moment came. One by one, they came into the court room. Their faces were beaming with expectation. One after another, they threw fists in the air as a greeting to the comrades who were in court. A roll call was made, and all were present.

Counsel Wameli took his place and made a passionate plea to Gen. Gutti and his panel members. He gave reasons why they should be freed! First, these guys have been on remand without trial for over four months. Second, they have no previous criminal record. Third, they have substantial sureties, some of whom had been blocked at the gate. Fourth, some of them are very sick and desperate to get medical attention.

The prosecutors, themselves soldiers, did not respond. They claimed they were not ready to respond today. “The people meant to respond on our behalf are not around. They are in Gulu. We pray court is adjourned to 25th to allow us make our response.” Our lawyer shot back, “We filed this application over a month ago, they had sufficient time to respond.”

Not so much debate followed. Gen. Gutti hit the desk with his wooden gavel! Case adjourned to the 25th of May. The accused are further remanded to Kitalya.