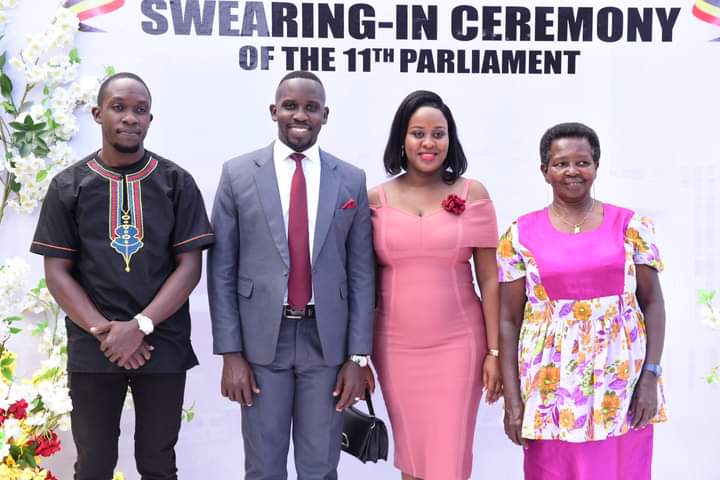 The National Unity Platform party spokesperson Joel Ssenyonyi was on Monday among the 133 legislators that took oath as members of the eleventh parliament. Ssenyonyi who was accompanied by his wife walked elegantly to the parliament podium and took oath as the Nakawa West MP elect. Immediately after the inauguration ceremony, Ssenyonyi was also bracing himself for the ongoing 71st graduation ceremony at Makerere University where he was pursuing a Bachelor’s degree in law.

The former NTV news anchor abandoned his fat paying newsroom job and joined Hon. Kyagulanyi Ssentamu Robert aka Bobi Wine in the struggle. Ssenyonyi first featured in the social media tax demonstrations in 2018 where then Kyadondo East legislator Kyagulanyi led a delegation of enraged Ugandans to protest the exploitative tax on the streets of downtown Kampala.

Ssenyonyi would later become the official spokesperson for the People Power movement before it morphed into the National Unity Platform party. He then presented himself as one of the aspirants for the Nakawa seat before the constituency would be sliced under the NRM gerrymandering policy.

With a Bachelor’s degree at a premier university and a legislative seat, Ssenyonyi is destined to be one of the vibrant members of the eleventh parliament. This, he prophesied in a statement of gratitude he wrote on his social media handles;

Today I’ve become a Lawyer after graduating from Makerere Law School. The 4 years were tough, having to juggle law school with many other aspects of my life, but God has been faithful. Later in the day I was sworn in as MP-Nakawa West. May God help me to use these two platforms to fight injustice.