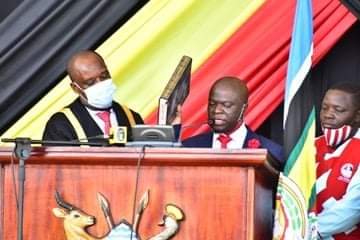 Muhammad Ssegirinya has today been sworn in as the duly elected Member of Parliament for the Kawempe North constituency. Ssegirinya had just returned from Nairobi where he had been upon his return from the United States after a medical treatment for his liver complications.

At parliament this afternoon, Ssegirinya arrived with Mityana municipality legislator Zaake Francis Butebi, and the NUP coordinator Sauda Madaada who was supporting him for his walk abilities. Ssegirinya appeared very frail and fatigued and could hardly support his own movement.

Ssegirinya takes oath at a time when his academic credentials are being questioned by Sulaiman Kidandala who claims they are false documents. His oath means he will serve as the Kawempe North MP till court declares otherwise.